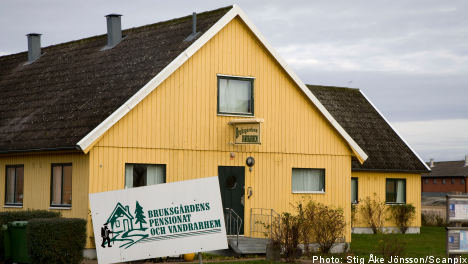 Controversy has surrounded the decision by officials in Malmö to use the property, located in the village of Hököpinge, with the matter being branded as a “circus” by the local council in Vellinge, which has refused to house asylum seekers for years.

Nevertheless, around 30 boys from Afghanistan and Somalia are expected to move into the building, which is run by independent company Attendo Care on behalf of Malmö County Council.

He vowed to investigate ways to close down the building ahead of Thursday’s opening, with local fire inspection officials expected to stop by and deem the property a health and safety hazard.

”No fire inspectors have shown up and health and safety inspectors didn’t find any shortfalls despite a bit of damp in some of the rooms,” Jonas Morian, spokesperson from Attendo Care, told the TT news agency on Thursday.

“The housing has been a youth hostel until fairly recently and complies with the necessary rules and regulations.”

The children are expected to live in the transit accommodation in Vellinge for a several weeks before being transferred to a number of other municipalities which have agreed to provide permanent housing.

According to Morian, Malmö has been struggling to manage a recent increase in refugee children and designated housing is now full, forcing some children to live in hotels.

Officials have managed to find property in other small towns in the Skåne region, raising concerns from some local residents

“The worries of those residents were put to rest after an information meeting was held,” said Morian.

“The people in Vellinge have a whole different attitude which we think is very unfortunate.”

Calls have been made by Skåne Christian Democrat politician Otto von Arnold to change the mindset of residents.

“To receive children from other countries can result in a positive contribution,” he said in a statement.

“Young people are coming here that can add to the development of the local community.”

Writing in newspaper Aftonbladet on Thursday, Swedish migration minister Tobias Billström stated that Vellinge must take its share of responsibility.

“To take care of these children is a matter for the council whether Vellinge wants it to be or not,” Billström wrote.

A Facebook group entitled “Vi som skäms över Vellinges flyktingpolitik” (‘We who are ashamed of Vellinge’s refugee policy’), urged its members to send email protests to the local council on Thursday.

“We’re not going to crash their server, we just want to be extremely irritating for them,” read the Facebook plea.

The emails received by the municipality on Thursday included views both criticizing and in support of Vellinge’s actions, according to Sveriges Television’s local affiliate.

“As a former Vellinge resident, I’m ashamed over your reaction and hope that you realize that you’ve got the refugee issue totally wrong for 2009,” read one critical email.

“Bravo, stand up for yourselves; Vellinge is a setting an example; if only your courage existed in other municipalities,” read an email praising Vellinge’s actions.