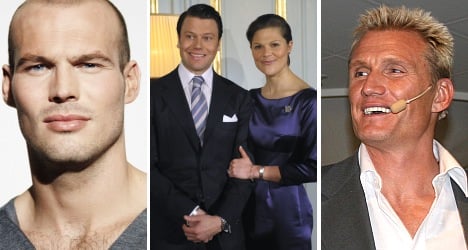 Swedish men have been judged as the world’s best looking by a dating website especially for beautiful people, while blokes from Britain have landed near the bottom of the list.

Website BeautifulPeople.com promises members they won’t be ”filtering through unattractive people” on their pages.

The fate of an application is dependent on whether your face fits as judged by existing members.

Swedish men fair the best with 65 percent of applicants accepted, according to figures released by the site.

The world’s second most beautiful males can be found in Brazil, with 45 percent of applicants accepted, while Danish men round out the top three, boasting a 40 percent rate of acceptance.

In comparison, only 12 percent of British guys made the grade and a mere 9 percent of Russian and Polish men who registered were deemed model applicants.

Scandinavian beauties also took the top spots for the fairer sex with 68 percent of Swedish woman being accepted, a percentage high enough to put them in second place and a notch below the 75 percent approval rate for women from Norway, deemed by the dating site to be the world’s most beautiful.

Women from Iceland came in a close third, with 66 percent being allowed to post their profiles on BeautifulPeople.com.

Since the site was launched in 2002 around two million people have been told their looks are not good enough to join.

“It might sound morally wrong to our critics but our growing success is the beautiful truth,” said the site’s managing director Greg Hodge in a statement.