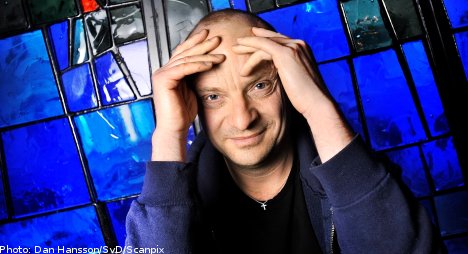 Jonas Gardell and his Sveriges Television film team were informed this week that their permit to film in St.Peter’s Basilica, or any other Catholic place of worship in Rome, to film material for his new series on Christianity, had been revoked, according to a report on the Christian website Dagen.

Gardell, who is a practising Christian, claims that it is the Swedish Catholic church bishop Anders Arborelius who is behind the decision to block his TV team, arguing that Jesus would never have excluded them, or anyone else.

Arborelius’ spokesperson, Maria Hasselgren, has confirmed that the bishop has not supplied Gardell and SVT with the required references to gain entry to the churches but denies that there has been any contact with the Vatican.

“He has said simply that he can not support Jonas Gardell filming in St.Peter’s. It has nothing to do with his sexuality, but due to his unsubstantiated criticism of the Catholic Church,” Hasselgren told Sveriges Radio’s (SR) “Studio Ett” programme referring to Gardel’s homosexuality.

“He (Jonas Gardell) is not prepared to conduct an objective debate and so it would be very strange to admit him to our holy places. Would the Jews admit representatives from the (far-right) Sweden Democrats to report from the synagogue?”

Gardell has responded to his exclusion by writing in a new feature in his programme in which he will address the subject of the “exclusionary Jesus” and will instead film from the from the steps of the basilica.

Gardell, who is a honorary doctor in theology from Lund University and the author of a recent book entitled “About Jesus” (Om Jesus), explained to SR that as he understands the situation the withdrawal of the permits also encompass a ban on him personally entering any of Rome’s churches.

“It is very upsetting, it means in practice that they have imposed a form of “bull of excommunication” against me.”