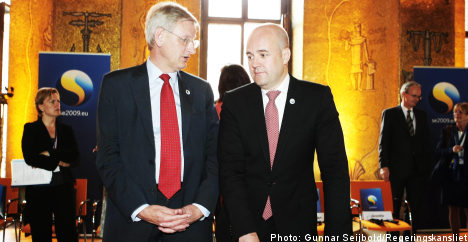 “We’re Monday, that’s three days away,” Swedish foreign minister Carl Bildt told reporters in Brussels when asked if the matter had been resolved ahead of the Thursday evening summit in the Belgian capital.

The EU’s 27 heads of state and government want to agree over dinner Thursday on the key new posts of European president and foreign policy supremo created by the reforming Lisbon Treaty, which was ratified this month.

Belgian Prime Minister Herman Van Rompuy had been favourite to take up the presidency, but the withdrawal by British Foreign Secretary David Miliband from the running for the diplomacy post may have hurt his chances.

Others mentioned for the job of president, with a term of up to five years, include Dutch Prime Minister Jan Peter Balkenende, his Luxembourg counterpart Jean-Claude Juncker and former Latvian president Vaira Vike-Freiberga.

Experts say the nominee should be a low-profile technocrat who operates behind the scenes to harmonise the work of the EU’s main institutions: the council of nations, the European Commission, and the European parliament.

For the foreign affairs post, former Italian prime minister Massimo D’Alema has been talked about as a strong candidate to be the EU’s top diplomat, if Miliband is not available, as has EU Enlargement Commissioner Olli Rehn.

Her chances may be enhanced as calls multiply for more women to be considered, including for the new European Commission to be appointed in coming weeks.

Commissioner Benita Ferrero-Walder said. “I think qualified women should be there.”

In a letter to the Financial Times daily, EU commissioners Margot Wallström and Neelie Kroes, and the vice president of the European parliament Diana Wallis urged EU leaders to pay more than just lip service to gender balance.

“We need a collective political commitment to ensure political representation of women,” they wrote in the business newspaper.

“Women make up a majority of the population, and in the 21st century European democracy cannot afford to use only half of its people’s talents, ideas and experiences. When women sit at the table, they can help to ensure that the political decisions reflect the needs of the entire population.”

Meanwhile former British opposition leader William Hague has urged the British government to drop its support for former premier Tony Blair as EU president and focus instead on winning a key financial post at the commission.

“Britain’s national interest and our common European interest in a pro-growth EU would best be advanced if the UK were to put its efforts into securing a major economic portfolio,” he wrote in the same newspaper.