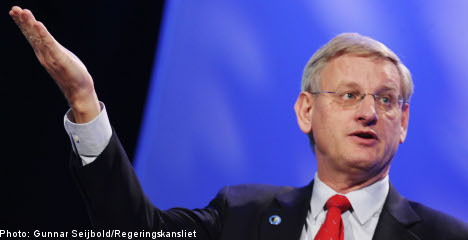 “I don’t think we are there yet,” Swedish Foreign Minister Carl Bildt, whose country holds the EU’s rotating presidency, told reporters in Brussels.

“I would hope that we would be in a position to recognise a Palestinian state but there has to be one first, so I think it is somewhat premature,” he said, before chairing talks with his EU counterparts.

On Sunday, chief Palestinian negotiator Saeb Erakat said they would “go to the UN Security Council to ask for recognition of an independent Palestinian state with east Jerusalem as its capital and with June 1967 borders.”

The United States voiced opposition to any unilateral Palestinian move to seek recognition, saying negotiations with Israel — currently virtually at a standstill — were the best way forward.

Bildt said the 27 nation EU, which is the biggest aid donor to the Palestinians and is helping train their police, wants to help the occupied territories, but that recognition of independence might not be the best way.

“There is a need to look at all the initiatives that might be possible,” he said. “We are discussing other steps in order to demonstrate our support for the Palestinian aspirations more clearly than we have done before.”

“It is clearly an act born by a very difficult situation where they don’t see any road ahead,” he said, expressing concern about the lack of movement in the strife-torn Gaza Strip, tensions in East Jerusalem and settlement activity.

EU foreign policy chief Javier Solana, the EU’s chief negotiator in the Middle East, agreed that it was too early to head to the United Nations.

“That has to be done with time, with calm, in an appropriate moment. I don’t think today’s the moment to talk about that,” he told reporters.

EU External Relations Commissioner Benita Ferrero-Waldner said the priority now should be “to really help the Americans bring both sides again to the table.”

“There are lots of ideas, things are being discussed but we are not yet there,” she said.