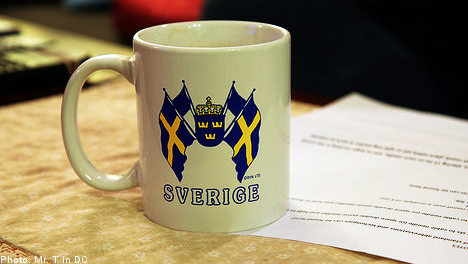 Sweden is not a country of tea-drinkers. Oh, they may think that they are, and they sure have a lot of tea around, but don’t let appearances fool you. The strengths of the average Swede are many but none of them lie in, or anywhere near, the teapot.

Now I come from a tea-drinking land. When I walk into a cafe in Ireland and ask for “tea” I get just that: black tea. In a pot. With a jug of milk. As the universe and whoever might be in charge intended.

In much the same way, I can wander into a pub in the old country and ask for a pint and have it taken for granted that it is a pint of stout that I am after and not, for example, a pint of shampoo, or soup, or paint thinner. A pint I ask for, and a pint I duly receive.

But not here, and not with tea. If you are at a loose end in Stockholm you can try the following amusing jape: go into a cafe and ask for tea. When the staff enquire as to which tea you would like, you say “normal tea”, and then watch their faces slowly contort in confusion and horror. To the Swedes, you see, tea does not come in “normal”, only in many varying degrees of “abnormal”.

That is the first problem: the selection. The average Swedish cafe prides itself on its vast acreage of tea blends: row upon row of shelving rising to the ceiling, all dedicated to obscure and mildly terrifying combinations of flowers, fruit, oils and grasses. In fact, I’m sure that most of the teas on offer have never been requested at all, and the jars are simply used to store old coins, buttons or the ashes of departed relatives. I mean, who can seriously want “rosebud, pear, rosemary and toadstool” or any other of the arcane combinations on offer?

The Swedes have also failed to grasp the concept of the teapot. Most tea is served by cramming the leaves into a little metal ball with fewer holes in it than the Swedish tax system, and then depositing this in a mug. Boiling (or more usually, warm) water is poured onto this in the hope that some of the water will trickle in and tease out the tasty tea particles inside. Just bring a good book, because this can take a while, if indeed it happens at all.

Of course, if you actually get presented with a mug or cup then you can count yourself lucky. Quite often in Sweden your tea will be served in a glass which, obviously, soon becomes too hot to lift. To overcome this the staff will often wrap a serviette around the now glowing glass before presenting it to you, instead of, say, using one of the six hundred solid coffee mugs sitting on a shelf within arm’s reach.

On one particular occasion I watched a cafe worker first pour the milk, then insert the little tea ball, and then the boiling water. I stared, aghast, as my tepid tea struggled to life only to fail miserably. Helpfully, or so I thought at the time, I pointed this out to the cafe worker, only to have him frown at me as if I had just questioned his parentage and trodden on his dog. So I drank it up, tasteless brew that it was, and did not return again.

Few people in Sweden understand that you must brew tea with boiling water, and before you add the milk. Even people who drink tea every day have often never heard of this, and if they have, still treat it like a quaint superstition. But, seriously, you can’t brew something in 60-degree water; you just make the water beige. And this is not, despite the belief of many, tea.

Now I am not a snob, but I do believe that if you offer something to be consumed, and take payment for it, then you should have some basic idea of how to serve and prepare it. That’s all I’m asking. And the old excuse “but we are not a tea-drinking country” does not really work any more, not in the heady international mix of modern Sweden.

It would be like an Irish waitress claiming that she “doesn’t really get this coffee stuff” while delivering to you raw coffee beans floating in custard, served in an old boot. It just doesn’t cut it.

But there are, thankfully, a few places in Stockholm where proper tea is served. There are several good tea shops, and many cafes and museums are starting to come up to speed too, offering actual cups, black tea leaves and, if the planets are properly aligned, even teapots.

So things are definitely looking up on the tea front. But I won’t get my hopes up quite yet, and will continue to carry a small emergency supply of proper tea-bags with me wherever I go in the Nordic realms.

Because when it comes to tea, you can never be too careful.

Paddy’s tips: I have personally managed to find real tea in Stockholm at Afternoon Tea on Dalgatan 36, Classic Tea Room on Rörstrandsgatan 25, Chaikhana on Svartmansgatan 26 in Gamla Stan (the Old Town), plus the wonderfully airy cafe at the National Museum. And much more tea information than you could ever require, about Stockholm and everywhere else, can be found at the excellent Teatropolitan Times blog.

Paddy has been shipwrecked in Sweden since 1997. His musings and ramblings can be found here.