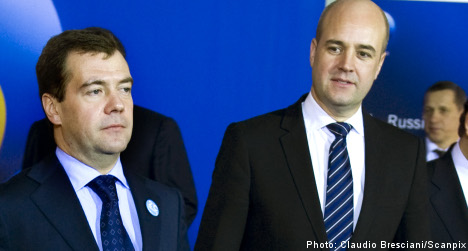 “We exchanged views on human rights, the rule of law and democracy in Russia, especially the situation for human rights defenders in Russia,” Reinfeldt said.

“This is an increasing cause for concern,” he added.

Medvedev did not respond directly to the EU criticism but said that on the Caucasus, “we have some differences here that should be acknowledged,” notably on the situation in Georgia and the secession of its two pro-Russian republics, Abkhazia an South Ossetia.

“But we don’t have to dramatise the situation, on the contrary we should discuss it,” he said, reiterating his view that Tbilisi’s actions during the 2008 war with Georgia over South Ossetia were an “aggression.”

Medvedev stressed that talks were underway to resolve the Nagorno-Karabach conflict between Azerbaijan and Armenia.

“This proves what we can do together, what we could have done if this aggression had not taken place last year,” the Russian leader said of the Georgia war.

Human rights groups have accused Russian forces of committing abuses during the Georgia war, and have complained that many killings of Russian journalists and activists go unsolved.

Earlier on Wednesday, human rights groups including Memorial in Russia and Human Rights Watch had urged the EU presidency to pressure Moscow on human rights.

In a statement, they accused Russian authorities of neglecting to investigate recent killings and kidnappings in the Caucasus, allowing an atmosphere of “impunity” to flourish.

Also on Wednesday, Russian activists bitterly accused Russian prison officials of neglect over the sudden death of a lawyer arrested in a major tax probe as officials refused to open a criminal investigation.

Sergei Magnitsky, 37, a lawyer for the Hermitage Capital Management fund which is under investigation in a criminal probe closely watched by investors, died on Monday of heart failure, the interior ministry said.

“This death will further compromise the standing of our judicial system,” activist Lev Ponomarev, a leading defender of prisoners’ rights in Russia, told AFP.