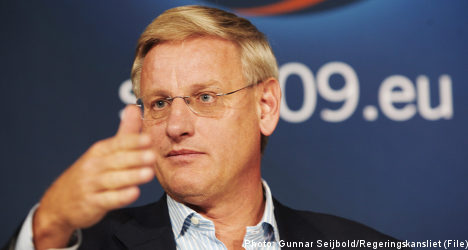 Bildt warned that the EU could miss a “historic occasion”, saying the choice could diminish Europe’s voice in the world.

“In my circle of foreign ministers there is undoubtedly a certain apprehension about the fact that certain heads of government are leaning towards a minimal solution for the presidency question, which could reduce our chance of having a clear voice in the world,” Bildt wrote on his blog.

A first-ever European Union president and a new foreign policy supremo will be named at a working dinner in Brussels Thursday by the EU’s 27 heads of state and government.

Bildt said the consensus required for making such a choice could translate into weaker candidates nabbing the top posts.

“This could mean — from our point of view — missing a historic occasion,” he wrote, adding that the coming into force of the Lisbon treaty was a chance for Europe to “become a new power on the global stage.”

Thursday’s talks will be coordinated by Sweden as the country holds the rotating EU presidency.