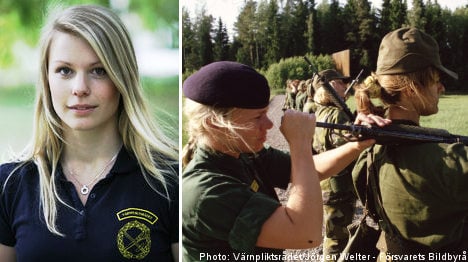 Asked whether women were in a rush to get access to specially tailored underwear, Katja Adolphson of the Swedish Conscription Council (Värnpliktsrådet) replied: “We’ve been in a rush for the last thirty years.”

Despite the fact that they’ve been part of the Swedish Armed Forces for decades, female soldiers still have no choice but to don men’s underwear or risk the perils of combat in flammable civilian bras and panties.

Female soldiers were previously told that their underwear wait would be over by the spring of 2009, but so far the goods have been unforthcoming.

“Each battalion has been given money to buy underwear for women, but since there are still no flame resistant alternatives available they have had to make do with civilian bras and panties,” said Adolphson, who is responsible for air force-related matters within the Council.

She explained that, until the situation was resolved, women would continue to run the risk of suffering skin burns if their underwear caught fire in a combat situation.

“How are women in the army supposed to feel fully welcome? It’s a form of indirect discrimination,” she told The Local.

Adolphson also underlined that underwear was just one of many battles women faced on the equipment front.

“Nothing has been designed with women in mind. All the sizes are too big: from boots, protective vests and shirts to the shoulder straps on our AK5 assault rifles.”

Adolphson said women currently made up around five percent of uniformed staff in the Swedish Armed Forces.

“But I would expect this figure to rise once they get better at giving us what we need,” she said.