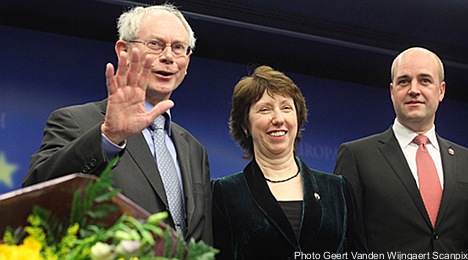 Both candidates received backing from all 27 EU countries for the positions creating by the Lisbon Treaty.

The talks were coordinated by Sweden in its is role as head of the rotating EU Presidency over a working dinner attended by heads of state and government.

“We are convinced that Herman Van Rompuy is the right man to lead the European Council in the right way,” Reinfeldt said after the summit meeting.

The Swedish Prime Minister was given a Rubik’s cube by European Commissioner José Manuel Barrosso as a memento and recognition of negotiating the positions after weeks of politicial wrangling.

The two candidates were largely overlooked in the run up to the announcement, which has been met with a level of surprise by commentators over their limited experience in foreign affairs.

After backing Tony Blair for the EU president role, British Prime Minister Gordon Brown made a last-minute decision on Thursday in nominating centre-left Baroness Ashton, who has been in her position as EU Commissioner responsible for trade for less than 12 months.

However, Christian Democrat leader Van Rompuy had come to the forefront as a possible candidate over the last few days.