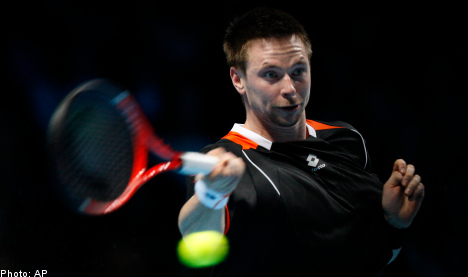 Söderling followed up on his French open victory over the Spaniard with a 6-4, 6-4 victory at the O2 arena.

Söderling saw off Nadal inside an hour and 38 minutes in their opening Group B match in the season-ending tournament of the world’s top players.

Four-time French Open defending champion Nadal had had his 31-match winning streak in Paris broken by world number 23 seed Söderling, who in becoming the only man to beat Nadal at Roland Garros, went on to reach the final.

And the Swede did it again with a tidy performance at the former Millennium Dome, at times giving Nadal the run-around on the medium-paced court.

“It was so nice. I was very nervous at the start but I got off to a great start,” Söderling said.

“I managed to play really well on the important points and I really served well when I needed to.

“Winning against the world number two is not bad.

“It’s tough to keep on playing long rallies every time, because he’s a great fighter, and he’s moving really well. So I tried to keep the points short, and it worked.”

Nadal said he did not go into the clash looking to get Söderling back for the French Open defeat.

“Every match is a different match. I went on court, tried my best as I did all my life. I didn’t think, not one second, on the Roland Garros match.

“I didn’t play really bad. But in the important moments, I didn’t have this calm, this necessary calm, to win these matches against the best players of the world.”

In-form Söderling , the world number nine, broke into the top 10 just over a month ago and was the first reserve for this tournament. He was called up after US Wimbledon finalist Andy Roddick withdrew due to a lingering knee injury.

The 25-year-old Monte Carlo resident has won only one tournament this year, the Båstad clay court title in his native Sweden.

Söderling took the first set within 40 minutes, breaking Nadal twice, including in the crucial final game when the Spaniard’s unforced errors handed the Swede the set.

Nadal won the toss and chose to receive but the left-hander found himself 3-0 down within 10 minutes.

Söderling held serve then broke when Nadal sent a shot into the net. The Swede then won the next game to love, sealing it with an ace.

Nadal won his first game to pull it back to 3-1 then broke Söderling back when the Swede fired wide after a rally. The Mallorcan levelled the scores by taking the next game to love, finishing with an ace.

After Söderling held serve, two consecutive line call challenges saw the serving Nadal 0-30 down but he recovered to take the game.

The Swede won the next game to love, leaving Nadal needing to hold serve to stay in the set. Söderling took him to deuce, gained the advantage when Nadal hit the net and took the set when his opponent fired long.

Söderling held serve in the first game of the second set but Nadal held serve to love and broke the Swede with a rare foray to the net to finish a rally.

However, Söderling was in fighting spirit and took a 0-40 lead next game, winning it by challenging a baseline call.

The fifth game went to seven deuces, with Söderling finally converting an advantage at the sixth attempt.

The next three games went with serve to make it 4-4. Söderling then fought off a deuce to leave Nadal serving to stay in the match.

Söderling took the Spaniard to deuce and gained a first match point when Nadal hit a shot narrowly wide. But Söderling shot just long to take it back to deuce.

The Swede went to match point again with a cross-court shot and won the contest when Nadal fired long.

Serbia’s Novak Djokovic and Russia’s Nikolay Davydenko are also in Group B, from which two go through to the semi-finals.