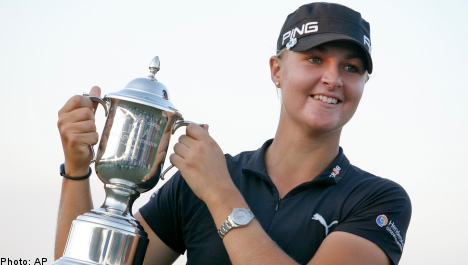 Nordqvist, 22, fired a final-round 65 to finish at 13-under 203 in the tournament reduced to 54 holes because of heavy rain over the weekend.

Mexico’s Lorena Ochoa was two strokes back on 205 and secured her fourth straight Player of the Year award when challenger South Korean Jiyai Shin couldn’t chip in from the front of the 18th green,

The win gave Nordqvist her second LPGA victory and made it through the season without missing a cut in 15 starts. She also won the LPGA Championship this year.

Shin and Nordqvist played in the day’s final group, right behind Ochoa. The Houstonian Golf and Country Club was still water-logged after heavy rain on Friday and Saturday. Players were allowed to lift, clean and place their balls.

Nordqvist surged to the lead at 12 under with five straight birdies from the eighth.

She gave back a shot at 13, then added back-to-back birdies at 14 and 15. With the victory in her grasp, Ochoa and Shin continued their duel.

“I definitely tried to be aggressive,” Nordqvist said. “It was pretty tight up the leaderboard, so you were really going to have to shoot low in order to pull it off.

Shin may have been feeling the pressure as she struggled with her putter on the front nine. She didn’t make a birdie until the 11th, when Ochoa was already within a shot of the lead.

Back-to-back bogeys by Ochoa at eight and nine opened the door for Nordqvist. Ochoa rebounded with a birdie at 15 to set up the dramatic finish.

Momentum seemed to be swinging Shin’s way when Ochoa needed two strokes to get out of a greenside bunker on the par-three 17th. Ochoa sank a bogey putt as Shin and Nordqvist watched from the tee.

But Shin also found a bunker on 17, blasted out short of the green and bogeyed.

Ochoa landed her approach at 18 about 16 feet from the pin, and gave the leaderboard a hard look as she walked to the green.

She and caddie Greg Johnston discussed the situation before Ochoa stepped up and drained her putt.

Shin’s second shot at 18 was short of the green. Her chip missed the hole by inches and Ochoa patted her heart and hugged Johnston.