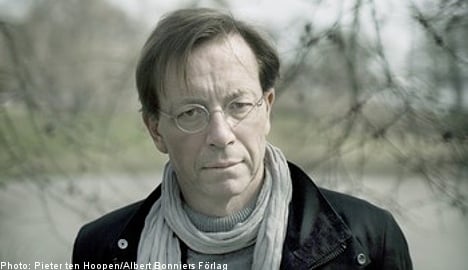 The book, De fattiga i Łódź (‘The poor of Łódź’), received widespread critical acclaim when it was published by Albert Bonniers Förlag in mid-September.

And just over two months later, novelist and literary critic Sem-Sandberg found himself accepting the 2009 August Prize (Augustpriset) for fiction.

The prize, named after Swedish author and playwright August Strindberg and awarded by the Swedish Publishers’ Association (Svenska Förläggareföreningen), is considered the highest literary honour in Sweden.

Sem-Sandberg’s weighty novel was chosen from among six finalists taken from an original field of 128 entries.

Rights to the book have already been sold in 18 different countries, according to the Svenska Dagbladet (SvD) newspaper.

Despite the book’s early success, Sem-Sandberg was surprised at being named the 2009 August Prize winner.

“So much of the literature, and especially films, about the Holocaust always focus in some way on those who survived so that we as readers can breathe out and say, ‘Yes, it turned out well in the end,” he explained to SvD.

“I have not written such a book, and that’s why I thought it would be hard to swallow in the context of the August Prize.”

Although he has no direct connection to the Holocaust or any Jewish heritage of his own, Sem-Sandberg said he never had any doubts about writing the book once the stories started coming to him, despite concerns about his ability to identify with certain characters.

“But if there are any obstacles to being able to empathize, those are obstacles which an author is required to overcome. And that’s what I’ve tried to do to the best of my ability,” he told the newspaper.

Brutus Östling and Susanne Åkesson won the 2009 August Prize for nonfiction with Att överleva dagen (‘To survive the day’), a collection of stunning photographs of birds in the wild.

The August Prize for children’s literature went to Ylva Karlsson, Katarina Kuick, Sara Lundberg and Lilian Bäckman for Skriv om och om igen (‘Write it over and over again’).

Also recognized at Monday’s ceremony was Isabella Nilsson, who won the Little August Prize for her book Verklighetsprojektet (‘Reality Project’).

The Little August Prize, given to high school aged authors, includes a prize of 15,000 kronor.