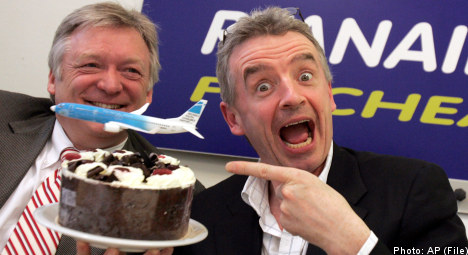 At a press conference in Stockholm, O’Leary explained that free toilets are a drain on Ryanair’s bottom line.

“They don’t generate any money,” he said, according to the E24 business news website.

“We don’t want the money either, but are interested in using the toilet space for extra seats in the plane…we have to think differently if we’re going to keep our prices low.”

O’Leary likened charging for a trip to the bathroom to charging for checked baggage, arguing that passengers may be happy to relieve themselves in airports prior to boarding if they knew it would save them some money.

The Ryanair CEO also had choice words for Sweden’s National Board for Consumer Complaints (Allmänna reklamationsnämnden – ARN) in the wake of a recent decision by the agency against the airline.

“ARN are a bunch of idiots who refuse to follow EU regulations,” said O’Leary, according to the TT news agency.

The criticism comes after ARN ordered Ryanair to pay a family 11,000 kronor ($1,600) in compensation after they were left on the ground in Gothenburg in April.

The family and several other passengers were waiting for their flight to London at Gothenburg City Airport, Ryanair’s normal port of call in Gothenburg. But due to bad weather, the plane instead landed nearly 40 kilometres away at Landvetter airport.

While officials at Gothenburg City Airport were willing to transport passengers to Landvetter to board the flight, Ryanair refused to cover the costs, according to the Svenska Dagbladet (SvD) newspaper.

The plane eventually departed for London from Landvetter, but without any passengers onboard.

While Ryanair agreed to cover the 5,000 kronor cost of the family’s airfare, the airline refused to compensate them for football tickets and hotel bookings in London which went unused because of the missed flight.

According to ARN, the airline failed to do enough to avoid causing the family economic harm by not purchasing flights for them on another airline – a line of reasoning with which O’Leary doesn’t agree.

“We think ARN is wrong and is misleading Swedish consumers. We’re not playing a PR game, we actually compensated people. We couldn’t care less if it hurts us or not because ARN is wrong,” he said, according to E24.

O’Leary added that Ryanair is currently in discussions with airports in Gothenburg and Skavsta, south of Stockholm, about adding five or six new routes to destinations in France, Italy, and Spain some time next year.