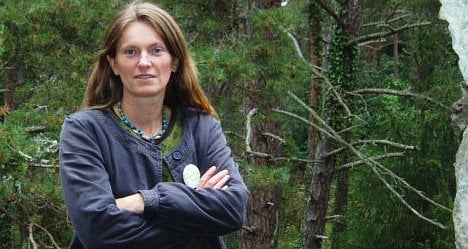 The remarks by Sofia Bothorp, which have brought her both praise and ridicule, came during a session of the local council in Karlskrona in southern Sweden.

During the debate, Bothorp sought to praise what she saw as a particularly Swedish acceptance of freedom of expression, in particular when it came to discussion of sex.

According to Bothorp, part of being Swedish is being able to “lick pussy in the morning and suck cock in the evening if you want to”.

Bothorp then went on to say she was proud to be Swedish because it meant being able to make jokes about “Allah’s little dick” and “the impotence of God the father”.

“Considering the forum, my wording was unfortunate. I said it in the heat of the moment and it just slipped out, but I think it’s important that the point I was trying to make doesn’t get lost,” Bothorp told The Local.

The remarks, which soon found their way to YouTube, prompted readers of the website of the local Blekinge Läns Tidning (BLT) newspaper to both praise and criticize Bothorp’s choice of words in online comments.

While some spoke of a “low water mark” in Swedish politics, others appreciated the Green politician’s earnestness.

“Finally, someone who speaks frankly, even within politics,” wrote one commenter.

But Gunilla Ekelöf, a member of the Liberal Party (Folkpartiet) and chair of the council, thought the comments were out of line.

“I think it was a totally unacceptable choice of words. You have to watch your language and think about what words you use in a gathering of politicians. I think it’s completely unnecessary to make reference to sexual matters,” she told Sveriges Radio (SR).

Bothorp explained that her comments ware made in the context of a discussion in which she argued against the Sweden Democrats’ definition of the ideal Sweden as a homogeneous land with a strong emphasis on traditional values. As in many other southern towns, the far-right party is well-represented on the local council in Karlskrona.

“Theirs is a Sweden of the 1950s and Astrid Lindgren. I grew up with that history and I like Astrid Lindgren but they shouldn’t be the only things that define our country,” Bothorp told The Local.

“We also have foreign aid, and we’re maybe seen as somewhat gullible doves among hawks, but at least we try to do the right thing.

“We have the right of public access (allemansrätten), freedom of speech, the principle of public access (offentlighetsprincipen), strong rights for women, and so on: all things we can be justly proud of,” she said.

Asked whether she was concerned that her comment referencing Allah might be seen as inflammatory in light of recent debates about caricatures of the Muslim prophet Muhammad, Bothorp was bullish.

“We in Sweden are sometimes afraid of defending values like freedom of speech. But it isn’t worth much if we don’t stand up for it, and the fact that I can say these things means that our system actually works. I mean, I’m not going to be indicted for saying what I did. And the diversity we have here is a prerequisite for retaining a high threshold for tolerance.

“After the debate, a politician who is a Muslim came up to me and said: ‘I don’t agree with what you said with regard to sex, but these freedoms are the reason I came to Sweden’. I’m proud to live in a society with this level of acceptance,” she said.