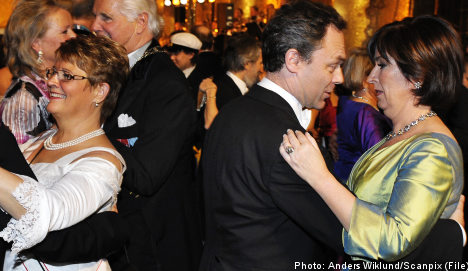 Sahlin gets close to Björklund and Olofsson at 2008 Nobel banquet

According to Synovate’s opinion poll, published in the Dagens Nyheter (DN) and Sydsvenskan newspapers, the far-right Sweden Democrats can lay claim to the support of 4.7 percent of the electorate.

If the poll were to reflect the general election result then neither of the major political blocs would be in a position to form a majority government and would leave the balance of power with a party that all parliamentary parties have ruled out working with.

The support for the Sweden Democrats is at a record level in this poll although is not considered statistically significant.

The red-green opposition triumvirate had the support of 48.7 percent in the poll while the governing Alliance had 45.4 percent.

Mona Sahlin called for the formation of a cross-bloc coalition in order to keep the Sweden Democrats from the corridors of power.

“Nothing other than a cross-bloc majority government is acceptable. With the challenges faced by Sweden in the next couple of years it would be a political catastrophe with a minority government dependent on the Sweden Democrats,” she told DN.

The parties that the Social Democrats could consider working with are the Liberal and Centre parties, although not the Moderates.

The overall results for voter support are as follows, with the changes from the previous poll in parentheses:

Synovate interviewed 1,972 people for the poll between November 11th-25th.