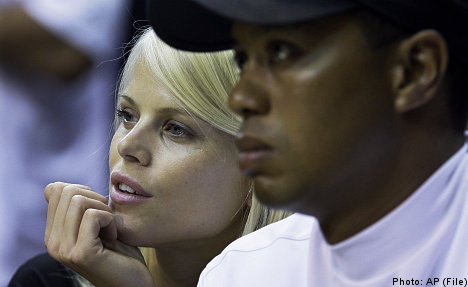 The superstar golfer took responsibility for an “embarrassing” late-night car crash, but declined to tell his story to police even as he lashed out at “unfounded and malicious rumors.”

Leading the speculation, the celebrity news website TMZ.com reported that a dispute between Woods and his wife, former model Elin Nordegren of Sweden, was at the centre of the incident.

By the website’s account, Nordegren confronted her husband about tabloid reports he was having an affair with a New York club hostess.

“The only person responsible for the accident is me,” Woods said. “My wife, Elin, acted courageously when she saw I was hurt and in trouble. She was the first person to help me. Any other assertion is absolutely false.”

Woods, 33, posted a statement on his website on Sunday saying he was solely responsible for the accident outside his Florida home, which left him with facial cuts, some bruises and a welter of unwelcome publicity.

“This situation is my fault, and it’s obviously embarrassing to my family and me,” the 14-time major golf champion said. “I’m human and I’m not perfect. I will certainly make sure this doesn’t happen again.”

But Woods again declined to speak to Florida Highway Patrol (FHP) troopers, who had expected to talk with him as part of their investigation into the accident.

Officers, who were turned away on both Friday and Saturday, were to meet Woods at his home and discuss how his car came to hit a fire hydrant and then a tree near his two million-dollar home in the suburbs of Orlando.

Instead, FHP spokeswoman Sergeant Kim Montes said troopers who arrived at the house were met by Woods’ lawyer Mark Nejame, who said Woods would not be meeting with them on Sunday.

“It has not been rescheduled,” said Montes, who said the crash remains under investigation and could still result in charges. Under Florida law Woods is not obliged to give a statement.

Authorities have already said alcohol was not a factor in the crash. Montes said investigators wanted to give Woods an opportunity to give his version of events.

Early FHP reports suggested that Woods was seriously hurt. Even as it became clear Woods was not seriously harmed, speculation swirled as to why he was leaving his house at 2:25 in the morning.

“Although I understand there is curiosity, the many false, unfounded and malicious rumors that are currently circulating about my family and me are irresponsible,” said Woods.

The FHP released a recording of a 911 emergency call in which a shaken neighbour tells how a black Cadillac Escalade hit a tree outside his house.

“I have someone down in front of my house,” says the caller, who is not identified and never mentions Woods by name. “I see him, he’s laying down.”

Daniel Saylor, police chief of the Orlando suburb of Windermere, has said Woods’ wife used a golf club to smash out a rear window to help extricate him after she heard the crash from inside their home.

Woods and Elin have been married for five years and have two children, daughter Sam Alexis, born in 2007, and son Charlie Axel, born in February.

Woods is scheduled to play his last tournament of 2009 next week, when he hosts the Chevron World Challenge in Los Angeles. The annual event benefits his charitable foundation.

Daly, a dual major winner affectionately known as ‘Wild Thing’, said the sport badly needed Woods and was relieved that the world number one was okay.

“Tiger’s the biggest asset the tour’s had in a long, long time,” Daly said ahead of this week’s Australian Open.