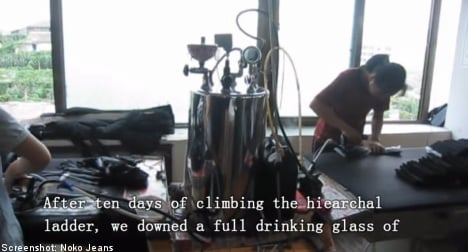 “The first 1,100 individually numbered jeans” will initially be sold in a Stockholm department store and on the Internet, and then in selected stores elsewhere, Noko Jeans said.

Jakob Ohlsson, Jacob Åström and Tor Rauden Källstigen — all under the age of 25 — said their project stemmed from a desire to make contact with the isolated communist state.

North Korea “has been isolated for so long and ethically, we thought that any sort of increased contact with the outside world would be good,” Ohlsson told AFP.

“It’s a country that sometimes treats its citizens terribly, but we think that our project is a way… to influence things” positively, he added.

The trio first contacted North Korean officials in mid-2007 by email, after finding an official website about outsourcing production to North Korea.

“The first year, we spent time trying to gain access to the country,” Ohlsson explained, adding that the trio visited North Korea twice, once to choose a factory and the second time to oversee production.

Production of Noko’s two models of jeans began in mid-2009 after a series of obstacles that included “being turned down by the biggest garment company in North Korea.”

While made in a communist country that has all but been cut off from foreign influence — and business — for the past 60 years, the jeans, not available for purchase in North Korea, will not come cheap.

The project also included some misadventures, and the small number of jeans available was not an attempt to create an exclusive product.

“We were supposed to start by making 5,000 pairs of jeans and our calculations were maybe not so good,” Ohlsson said.

The assembly of the pants — the cut, the make and trim — is all done in North Korea, the company said.

While the upstarts are not targetting the North Korean market with their jeans, they said in a statement they hoped to one day “make clothes that our friends in the country can wear too.”

The young firm played down the fact it was doing business in a country often criticised for its poor human rights record.

“We’d seen the factory… you could produce something there and still look yourself in the mirror,” Ohlsson said.

“When we arrived in North Korea in 2008, we expected worse (than in previously visited China) but were rather happily surprised to see a clean factory, lots of space,” Noko Jeans said, adding it stayed in North Korea for 10 days to control the application of a business code of conduct based on European standards.

“No, it is not a sweatshop,” the firm said of its Pyongyang-area factory.