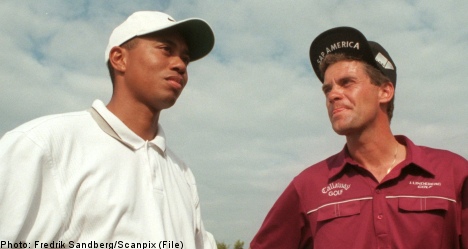 “I really feel sorry for Elin — since me and my wife were at fault for hooking her up with him,” Parnevik told Golf Channel from the PGA Tour’s qualifying tournament in West Palm Beach, Florida.

The comments came following Wood’s admission of “transgressions” which had hurt his family and after days of media speculation about the what caused Woods to crash his car outside his home last Friday.

Parnevik, a five-time winner on the PGA Tour, added that he had contacted Woods’ “people” following the accident but had not received a return call.

“It’s a private thing of course,” he added.

“But when you are the guy he is, the world’s best athlete, you should think more before you do stuff.”

The 29-year-old Nordegren,a former model in her home country, began working for the Parneviks in 2001 and Parnevik has said that he considers the fellow Swede as part of his family.

Parnevik who initially introduced her to Woods, also questioned his previous assessment of the golfing great.

“We probably thought he was a better guy than he is. I would probably need to apologize to her and hope she uses a driver next time instead of a 3-iron,” Parnevik continued.

The comments came after an admission by Woods he had disappointed his family following reports the 14-time champion had had an extramarital affair.

“I have let my family down and I regret those transgressions with all of my heart,” Woods said, appealing for privacy after celebrity gossip magazines and tabloids reported on three women claimed to have been his mistresses.

Woods did not directly respond to reports about his alleged affairs, but his mea culpa sought to draw a line under a publicity disaster that has damaged the golfing great’s squeaky clean and highly lucrative image.

It came hours after the celebrity magazine Us Weekly posted an online recording of what it said was the 33-year-old golf star begging Los Angeles waitress Jaimee Grubbs to change her voicemail to hide their affair from his wife 29-year-old Elin, a former model and mother to the couple’s two children.

In his statement on his website, Woods admitted he was “far short of perfect” and said “I have not been true to my values and the behavior my family deserves.”

The star promised “to be a better person and the husband and father my family deserves,” but he also asked the media to leave him in peace.

“Personal sins should not require press releases and problems within a family shouldn’t have to mean public confessions.”

Rumors started soon after Woods crashed his car in strange circumstances on Friday at 2:25 am outside his Florida home, where he lives with the Elin and their two children.

Woods refused to speak to police, fueling speculation that he had been fleeing Elin after she became violently angry at reports he was seeing a New York nightclub hostess.

On Tuesday, hostess Rachel Uchitel told tabloid newspapers she barely knows 33-year-old Woods and never had a sexual affair with him.

No sooner had that story been nipped in the bud when Us Weekly named Grubbs as another alleged mistress, quoting the cocktail waitress saying she had secretly dated the golfer for 31 months and met for sexual relations 20 times.

The magazine on Wednesday posted an online recording purported to be Woods urging Grubbs not to identify herself by name on her voicemail because he was afraid his wife was becoming suspicious.

In the recording — which could not be verified — a man is heard saying:

“Hey, it’s, uh, it’s Tiger. I need you to do a huge favor. Can you please take your name off your phone? My wife went through my phone and may be calling you.”

At the end of the brief message, the nervous-sounding man says: “Do this for me. Huge. Quickly.”

The only good news for Woods this week has been the decision by police not to file criminal charges over Friday’s crash. Woods was issued Tuesday with a careless driving citation and faces a fine of $164 and four points on his license if convicted.

In the wake of the crash, celebrity gossip websites speculated that Elin chased Woods with a golf club and smashed the rear windows of his vehicle, causing him to lose control.

But Florida police spokeswoman Kim Montes said there was insufficient evidence for more serious charges and no claims of domestic violence were made.

Nevertheless, Woods’s PGA Tour friends and rivals were largely supportive Wednesday of the star who has taken their game to an unprecedented level of global prominence.

Golfer Steve Stricker welcomed the golfing legend’s move to address allegations, but wasn’t sure just how much explanation Woods owed to anyone other than his wife.

“I was happy to see it come out a little bit, not happy on what was said in there, but just happy that he came out and addressed it,” Stricker said. “But I’m on that fence whether it’s even any of our business or not.

“I wish it could have just been handled with Elin and Tiger if there was a problem. Do we really need to know? I guess that’s the bottom line,” he added.

“Everybody likes to get into these celebrities’ personal lives and it’s all fascinating and everything. But deep down what does it really matter?”

Stricker is among the 18 golfers scheduled to tee it up Thursday in the Chevron World Challenge, an event Woods has hosted annually to benefit his charitable foundation.

The golfing star announced Monday in the midst of the media storm that he would not attend the tournament at Thousand Oaks, near Los Angeles.

Stricker acknowledged that the hugely popular 14-time major champion would eventually have to do a little image rebuilding, but said his vast army of fans worldwide would prove forgiving.

“I think his image is going to take a little bit of a shot,” Stricker said, expressing hope that Woods would make television appearances to “pour it out” and explain what happened.

“People forget, and if he just does the right things from here on out, people will forgive him and move on.”

Rising US star Anthony Kim said Woods had generously supported him in his early days on the tour and deserved credit for his professionalism in the face of constant public scrutiny.

“He has done so much for the game of golf, so much for other people. His charities are tremendous and support so many kids and their futures,” said Kim, who is playing in the Chevron World Challenge.

“Whatever the problems may be and all the speculation, you wish the best for him,” he added.

“I know he’s going to come out a better man out of this.”