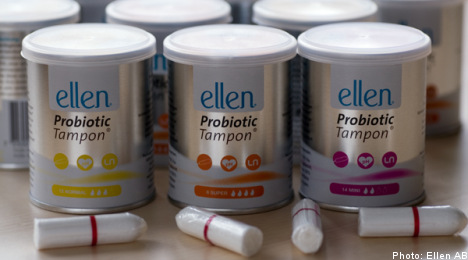 Within two hours of the announcement of the agreement between Swedish biotech company Ellen AB and China’s Beijing Zhonglian Pharmaceutical, shares in the company shot up 39 percent on the First North stock exchange.

“We couldn’t have asked for better timing for Ellen’s launch in China,” Ellen CEO Monica Wallter said in a statement.

“It’s incredibly positive that China’s ministry of health has started an education initiative which in the long run will mean that gynaecologists will be able to optimize their advice and treatment of Chinese women’s vaginal discomfort,” added Ellen’s Wallter

“An old, tried-and-tested household remedy against vaginal discomfort entails dipping a tampon in yoghurt. The ELLEN tampon is a spin-off of this concept,” the company explained, adding however that “all lactic acid bacteria in LN are of human origin and are the most common strains found in healthy women’s natural vaginal flora.”

“Interest in probiotics is huge in China and Ellen’s probiotic tampon has a very large potential market here. We’re extremely pleased about the deal,” Jia said in a statement.

The head of Ellen’s subsidiary in China, Peter Rosta, also hailed the deal as “very satisfying”, calling Zhonglian’s “the right distributor” to ensure the Swedish tampons end up on the shelves of as many of China’s 230,000 pharmacies as possible.

Zhonglian plans to start marketing the Ellen probiotic tampons in China in the spring of 2010 in connection with educational seminars for the country’s gynaecologists which are part of the health ministry’s efforts to provide continuing education in vaginal health.

According to Ellen, vaginal discomfort is a larger problem in Asia than in other parts of the world, having affected 75 percent of the female population at least once, and up to a quarter of all women on a daily basis.

In China alone, the problem affects an estimated 270 million women.

Income reached 2.3 million kronor, compared with 3.1 kronor one year ago.

Zhonglian is a part of the Sinopharm Group, one of China’s largest pharmaceutical firms, with an annual turnover of roughly 20 billion kronor.