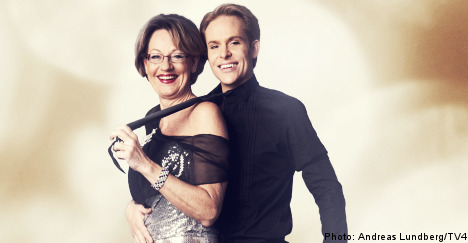 “It’s a great start to the campaign,” she told the TT news agency.

“Considering the Feminist Initiative has neither the money nor the staff, this is naturally a great opportunity.”

Schyman added that she expects her appearance on the show, which is broadcast during prime time on TV4, will benefit the party.

“Many people think that feminists are angry, bitter old hags who go after and hate men. Now many will be able to see that this image is both wrong and prejudiced and that will have great political benefits,” she said.

Other parties will have to settle with paying to appear on TV4 in the upcoming election year, with the cheapest ad spots going for one million kronor ($145,000) and ranging up to seven million kronor, not including value added tax.

In addition to the cost of airtime, other parties will also have to pay for production costs, leading some parties to charge that Schyman’s appearance on Let’s Dance gives the Feminist Initiative an unfair advantage.

“TV4 is a commercial channel, but I think that they could learn something from public broadcasters, and not give one party such an advantageous position during an election campaign,” said the Left Party’s Siv Holma, chair of the Riksdag’s committee on culture, to TT.

While Social Democratic party secretary Ibrahim Baylan also thinks Schyman’s party is due to get a lot of additional attention, he doubts it will generate any more votes.

“If it’s an advantage or a disadvantage depends on how she dances. And we shouldn’t underestimate voters. They are more serious than many experts believe,” he told TT.