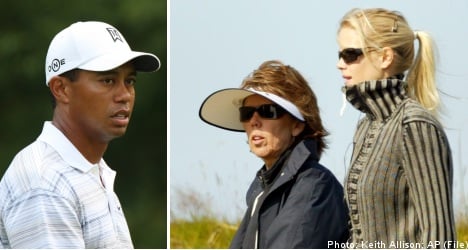 On Monday, a Gävleborg county administrative board spokesperson Eva Malmborg told Sveriges Radio (SR) that Holmberg had cancelled all her appearances for the week.

“The governor has taken vacation and isn’t available this week,” Malmborg later told the Aftonbladet newspaper, refusing to confirm where the governor may have traveled.

“I’m only the spokesperson for the administrative board and can only report that she is on leave. I don’t know where she is; that’s her private life.”

Holmberg’s decision came unexpectedly, forcing the cancellation of several appearances on Monday, including the opening ceremonies of the Vattendagarna 2009 (‘Water Days 2009’) conference in Bollnäs municipality.

Pleas from the world’s number one golfer to be left alone after confessing earlier this week to “personal sins” were ignored as Britain’s tabloid press joined the fray on Sunday, bringing a new set of allegations to light.

The News of the World, Britain’s top-selling tabloid, published an interview with a restaurant manager who claimed to have slept with the golf star at his marital home near Orlando, Florida.

The weekly newspaper alleged that Mindy Lawton, 33, was the first of his known affairs but that she was dumped by the golf star in early 2007 when he began seeing 24-year-old Los Angeles cocktail waitress Jaimee Grubbs.

Britain’s Sunday Mirror reported that Woods had also had a fling with 26-year-old model Jamie Jungers in a Las Vegas hotel, but the source for the tabloid’s claim was the woman’s former fiance.

A US tabloid, The New York Daily News, linked Woods to a sixth woman, Cori Rist, who was quoted as saying she had: “No comment… Not at this time.”

Woods, 33, apologized Wednesday for “transgressions” in his family life as a magazine posted what it said was damning evidence of an extra-marital affair between him and Grubbs.

Another alleged mistress Kalika Moquin, manager at a Las Vegas night club, told celebrity magazine Us Weekly on Thursday that rumours of an affair between her and Woods were “completely untrue.”

The first woman linked to Woods, Rachel Uchitel, has also denied an affair but widespread tabloid reports say she is seeking a multi-million-dollar payout to stop her from revealing a horde of damaging emails and messages.

Celebrity gossip site RadarOnline.com reported that Uchitel, who canceled a scheduled press conference on Thursday citing “unforeseen circumstances,” will receive between one and three million dollars for her silence.

Woods has yet to be seen in public since the furor erupted when he crashed his car on November 27 outside the Florida home where he lives with Nordegren and their two children.

Uchitel was first linked to Woods in a report two days before the golf star drove his car into a fire hydrant and then a tree at 2:25 am. He was treated in hospital for facial injuries before being released.

After the crash, celebrity gossip websites speculated that Elin chased Woods with a golf club and smashed the rear windows of his vehicle, causing him to lose control.

The 14-time major winner ended five days of silence over the affair allegations on Wednesday after celebrity magazine Us Weekly quoted Grubbs as saying she had secretly dated him for 31 months and met him for sex 20 times.

The magazine posted online an audio recording purported to be Woods urging Grubbs not to identify herself by name on her voicemail because he was afraid his wife was becoming suspicious and might dial her number.

“I have let my family down and I regret those transgressions with all of my heart,” Woods said, but added he did not want to elaborate on his shortcomings in public.

“Personal sins should not require press releases and problems within a family shouldn’t have to mean public confessions,” he said, attempting to draw a line under a scandal that has left his squeaky clean image in tatters.

On Sunday Woods thanked staff, fans and sponsors for keeping his charity event, the Chevron World Challenge, afloat and apologized for his absence, which he has said is due to injuries sustained in the crash.

“I am so grateful to them for their efforts, and I am sincerely sorry I was unable to fulfill my duties as host and player in this important event,” Woods said in a statement posted on his website.