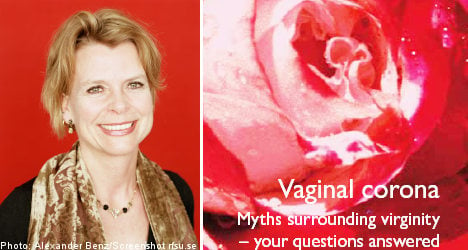 “The mythical status of the hymen has caused far too much harm for far too long,” the Swedish Association for Sexuality Education (RFSU) said in a statement.

“The new term in English is vaginal corona.”

The linguistic declaration comes on the heels of what RFSU considers a successful campaign carried out in Sweden aimed at dispelling a number of myths surrounding the hymen and virginity.

“There are lots of questions about the hymen throughout the entire population of young people in Sweden,” RFSU secretary general Åsa Regnér told The Local.

“Both among girls and boys, and among people born in Sweden as well as those born in other countries.”

In an attempt to correct some of the myths surrounding the hymen, RFSU last spring published an informational pamphlet on the female reproductive organs which featured a new Swedish term for the hymen, slidkrans.

“Krans is a Swedish word for something shaped like a circle,” Regnér explained.

“Language has power over how we think. The point is to provide information about how the body works.”

The group hoped the new term would displace the traditional Swedish word used for the hymen, mödomshinna, which translates literally as “virginity membrane” and led to misconceptions about female sexuality, according to RFSU.

“The old Swedish term indicated that there is a membrane covering the vaginal opening that needed to be broken,” said Regnér.

“It was portrayed as the boundary between guilt and innocence…girls have been raised to protect their hyman, not to run, jump, or ride horses. But in reality there is no membrane; rather there are folds of mucous membrane which form a crown around the vaginal opening.”

Following publication of the Swedish pamphlet, RSFSU began fielding a number of inquiries to have the document translated into other languages, settling on English, Arabic and Sorani Kurdish.

“Groups who contacted us were interested in finding a new term for hymen that didn’t strengthen these myths,” Regnér explained.

“After talking to these sexual and reproductive health and rights organizations who work with people from non-Swedish ethnic backgrounds, we decided to start with those three languages.”

According to Regnér, the hymen’s mythical status with respect to female sexuality has had a detrimental effect on women’s reproductive knowledge and rights.

“We work with a lot of organizations which provide sanctuary to women and girls who come from an honour culture where this sort of information is vitally important,” she said.

“In extreme cases, the mythology of the hymen becomes a major focus of a girl’s life and ends up giving men the right to control her body.”

Regnér explained that the term hymen is rooted in the Greek word for membrane. Rather than a fragile membrane that breaks, however, the hymen is actually multiple folds of mucous membrane.

“The vaginal corona is a permanent part of a woman’s body throughout her life. It doesn’t disappear after she first has sexual intercourse, and most women don’t bleed the first time,” said Regnér.

According to RFSU board member Alán Ali, who leads projects dealing with honour-related oppression in Malmö in southern Sweden, spreading awareness of the new hymen lexicon is important for women’s sexual freedom.

“The myths surrounding the hymen were created to control women’s freedom and sexuality. The only way to counteract this is by disseminating knowledge. Translating this booklet into languages spoken by large communities in Sweden is a step in the right direction,” he said in a statement.

“We also hope the booklet and the new term will find their way to other countries.”

Regnér added that most of the groups RFSU has been in contact with internationally are in agreement that there is need for a new term for the hymen and that RFSU’s “vaginal corona” is meant as a starting point.

“This is our proposal,” she said.

“We recognize there are limitations when translating between languages, but we hope this is at least leads to more discussion about the issue.”

She added that, finances permitting, RFSU hopes to translate their brochure to other languages, including Spanish and Turkish.

“We’ll see what happens. It all depends on finding the money,” she said.