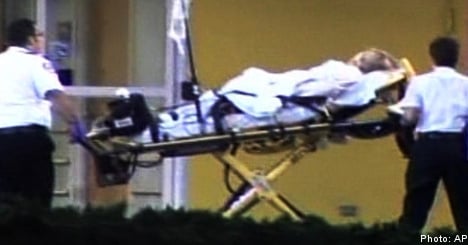 She arrived at the hospital via ambulance in the early hours of Tuesday morning after a 911 emergency call was placed from the Woods mansion outside of Orlando.

“She’s doing well under the circumstances,” a source told the Expressen newspaper.

Holmberg, Sweden’s former migration minister and current governor of Gävleborg County in eastern Sweden, is in the United States with her daughter Elin Nordegren amidst an ongoing scandal involving a number of alleged infidelities by her star-golfer son-in-law.

Media outlets in the United States have been speculating for much of the day about who exactly was whisked away from the Woods estate. The woman, seen in video footage shot by a local television station, was described as being a middle-aged female with blonde hair, spawning theories that it was likely Holmberg who had taken ill.

A spokesperson for Holmberg confirmed on Monday that the governor of Gävleborg had cancelled all her appearances for the week and had taken leave from her post.

The news of Holmberg’s hospitalization comes following reports that Nordegren has moved out of the Windmere mansion she shares with Woods and their two children and has decamped to another house in the area.