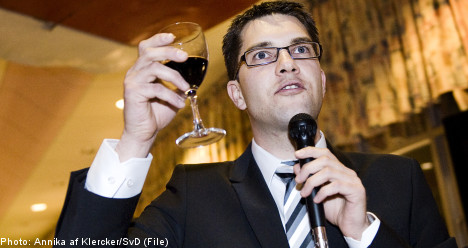 The poll marks the first time Jimmie Åkesson’s nationalist party has surpassed the four percent threshold in one of Statistics Sweden’s biannual surveys of some 9,000 voters.

The Sweden Democrats would however not be able to tip the balance of power were a general election to be held today, as the red-green opposition currently holds a 7.5 point lead over the governing centre-right coalition.

Nevertheless, Åkesson is certain that his party is going to make it into the Riksdag next autumn.

“I’ve been sure for a long time. At this point a lot would have to happen for us to not to get more than 4 percent,” he told the TT news agency.

The largest support for the Sweden Democrats comes from men between 18- and 34-years-old, with the party’s strongholds located in Malmö and the northeast portions of Skåne in southern Sweden.

Support for the party remains weak however in northern Sweden and the Stockholm region.

“We’re consciously putting effort into the big cities and have appointed a special election observer in northern Sweden,” said Åkesson.

Åkesson also predicts that the distance between Sweden’s two main political blocs will be closer than the SCB poll predicts, giving the Sweden Democrats a decisive role in deciding the balance of power in the Riksdag.

“We’ve said that we won’t actively support Mona Sahlin as prime minister because she’s a symbol for failed integration. But the other bloc isn’t much better and I won’t rule out cooperating with the red-green bloc,” said Åkesson.

With the Copenhagen climate summit in full swing across the Öresund strait, the Green Party emerged as the big winner in the statistics agency’s November poll, jumping 2.4 points since May to 8.4 percent.

For prime minister Fredrik Reinfeldt’s Moderate Party, the poll results were considerably less welcome, as the largest party in the sitting government slipped back 3.7 points to 26.2 percent.

Altogether, the Alliance parties scored 42.5 percent, compared to 50.0 percent for the parliamentary opposition.

“The difference between the two blocs has increased somewhat. That means we have to be more active and clearer about what we want in the future,” Moderate party secretary Per Schlingmann told TT.

Despite high numbers for the opposition, Schlingmann still feels the election is an open race.

“But it puts big demands on us,” he said, adding that the Moderates wouldn’t be tempted to move closer to the Sweden Democrats’ immigration policies as a result of the latter’s success.

The result includes the Sweden Democrats 5.1 percent, with The Pirate Party dominating the remaining proportion of the Others category (Source: Statistics Sweden).