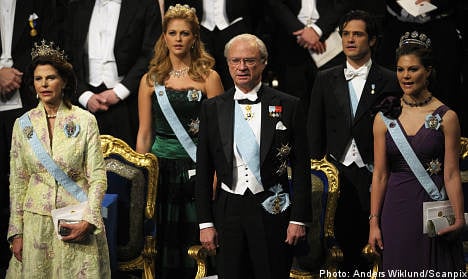 The laureates in literature, economics, medicine, physics and chemistry received their prizes at a gala ceremony. The formal event, held as tradition dictates on the anniversary of the death of prize founder Alfred Nobel in 1896, took place at Stockholm’s Concert Hall which was decked out in white and green flowers for the occasion.

The laureates, royal family and specially-invited guests were clad in white tie dress for men and evening gowns for women.

A record five women were awarded Nobels this year — nearly one-eighth of the 41 awards to female recipients in the 108-year history of the prize.

Romanian-born German writer Herta Müller won the Nobel Literature Prize for her work inspired by her life under Nicolae Ceausescu’s dictatorship in Romania.

Australian-American Elizabeth Blackburn and US researcher Carol Greider shared the Medicine Prize with Jack Szostak of the United States for research into cellular ageing.

Israel’s Ada Yonath shared the Chemistry Prize with Indian-born Ramakrishnan Venkatraman Ramakrishnan and US scientist Thomas Steitz for work on the ribosome, a cellular machine that makes proteins.

And in a major breakthrough, Elinor Ostrom of the US won the Economics Prize — the first time a woman has won in that field — together with Oliver Williamson, another US national, for their separate research on fighting waste in organisations.

The Physics Prize was swept however by men: Hong-Kong based scientist Charles Kao, Canadian-US research Willard Boyle and George Smith of the US were honoured for work on fibre optics and light sensing that helped unleash the Information Technology revolution.

The Nobel prize consists of a gold medal, a diploma, and 10 million kronor ($1.4 million) per discipline, to be shared if there is more than one recipient.

The Stockholm ceremony was to be followed by a gala banquet and ball for some 1,300 invited guests.

Earlier on Thursday, US President Barack Obama accepted the Nobel Peace Prize at a separate ceremony in Oslo.