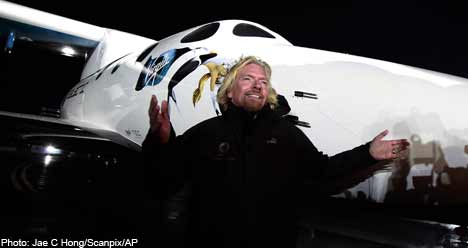 “Space tourism sounds like science fiction, but we are talking about only a number of years into the future,” Johanna Bergström-Roos, from the Esrange space centre in Kiruna, told the newspaper Dagens Nyheter.

Earlier last week, billionaire Richard Branson paraded his company Virgin Galactic’s specially designed tourist ship ‘SpaceShipTwo’, which will take tourists out into space. Virgin Galactic, has selected two ‘spaceports’, from where tourists will be able to launch into space. One of the spaceports is in New Mexico, while the other is the Sweden Spaceport, in Kiruna.

If all goes according to plan, space tourists may be flocking to Kiruna within several years. “Virgin Galactic has its spaceport in America and will commence their first flights there in 2011. When they have been operating for half a year, it will then be time for the European market, and they’ll then come to us,” Bergström-Roos told Dagens Nyheter.

In an earlier interview with TV4, Branson said that space journeys from Kiruna could be a reality by 2012. “We would love to send up people in a rocket so that they get to experience the northern lights from space. Sweden has been very welcoming and very enthusiastic about this project, so I am hopeful that fairly soon after we start our space programme from New Mexico we can start up in the north of Sweden.”

At 15,000 metres, the mothership releases the spaceship, which freefalls before its rocket motors fire up, accelerating the spaceship upwards again. The rocket’s motors are turned off again and the rocket continues in its upwards trajectory until it reaches its zenith point, when it freefalls again. “This is called air launch. The spaceship starts in the air from free fall and glides for approximately 90 seconds, to about 10 kilometers high. A little like a rollercoaster, first free fall and then up in the air at full speed,” explained Bergström-Roos.

“When the spaceship travels in free fall the passengers are weightless … Then they are unlatched from their chairs and they drop to the floor so they can tumble about and explore the experience of weightlessness,” she added. After four or five minutes it’s time to fasten themselves in again, as they head back into the Earth’s atmosphere. The entire trip will take around two-and-a-half hours.

Virgin Galactic chose Kiruna ahead of numerous other spaceports around the world that were vying for the space tourism company’s patronage. “We have space expertise, fantastic wild nature, the northern lights and the ice hotel. It is not a bad package,” said Bergström-Roos, while emphasizing that Kiruna spaceport is an optimal place for space journeys from a safety standpoint. The area is uninhabited by the public, and Spaceport Sweden has conducted rocket launches since 1966.