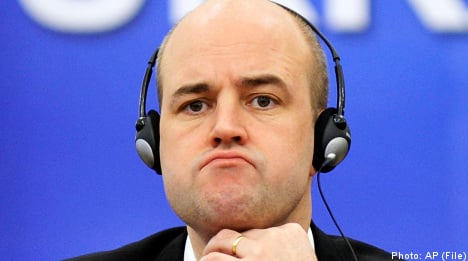 “It’s very worrying. Mona Sahlin will become prime minister the way things are looking now, without her letting anybody know where she wants to take Sweden and without [the opposition parties] having prepared any common policies” said Reinfeldt, speaking on the sidelines of a speaking engagement on Monday at Stockholm University.

“I’m going to do all I can to avoid throwing Sweden into cold water,” he added, before predicting that next year’s election is likely to crystallize into a referendum on the opposing blocs’ respective employment policies.

A Sifo survey presented on Sunday put the three-party red-green opposition in an eleven point lead over the government. According to the poll, the Social Democrats, Green Party and Left Party enjoy the combined support of 52.2 percent of the electorate, compared to just 40.8 percent for the centre-right Alliance.

A Statistics Sweden poll published last week also indicated that Mona Sahlin and her allies would enjoy enough support to form a government were an election to be held today.

Social Democrat leader Mona Sahlin said she did not wish to set too much stock in opinion polls released nine months before the election, but she expressed pleasure that the red-green alliance was beginning to gain momentum.

“I think it’s partly down to the distinctiveness of the red-greens. It was all very unfamiliar at the beginning, prefaced by quite a difficult start. Now we have presented ourselves, established ourselves and have delivered quite a lot of common policies. That’s something voters are increasingly seeing, and trusting, and appreciating,” said Sahlin.

“But then there’s also the debates about unemployment insurance, tax on pensioners and social insurance that are hitting the government hard. Their politics have always looked like this but it’s now that they’re being revealed,” she added.

Reinfeldt said he believed his own protracted absences while on EU presidency duty may have had some bearing on the poor poll results.

The Prime Minister also believed criticism surrounding widespread changes to Sweden’s sickness benefits system may have impacted negatively on the government’s rating. But Reinfeldt added that the Social Democrats’ own policies didn’t differ substantially from those of the government.

“Basically they don’t have any other proposals. They use information from the media and make a lot of noise because they think it will boost their support.”

Reinfeldt noted that top Social Democrats who had looked into the social insurance system had reached the same conclusion as the Moderate-led government: that it was not sustainable for Sweden to have the highest rate of sick leave in Europe.

“[Former Social Democrat prime minister] Göran Persson used to travel around in Europe boasting that we didn’t have any unemployment,” said Reinfeldt, who accused his predecessor’s policies of leading to a situation in which the social insurance system was used as a buffer behind which to hide jobless figures.

“People received a stamp on their forehead to the effect that their working days were over,” said Reinfeldt, adding that the Moderate Party did not believe in pushing people into early retirement programmes simply because they had an existential crisis at the age of 32.

His party had faith in the power of the individual to bounce back, said Reinfeldt.