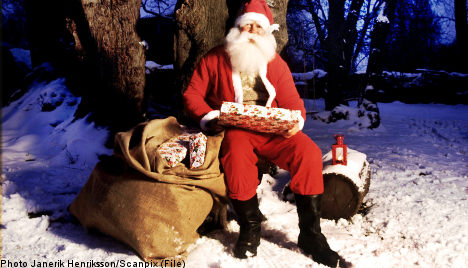 “The colder weather actually looks like lasting for a while, meaning there’s a chance that the snow now falling may stay on the ground until Christmas,” said Linnea Rehn at Swedish meteorology agency SMHI.

According to SMHI, snow showers are expected to move south and east from Jämtland and Härjedalen in northwest Sweden down to eastern Svealand in central Sweden by nightfall.

The agency has issued a class 1 warning for snowfall along Sweden’s east coast, forecasting continuing snow showers into Tuesday, which are expected to reach as far south as Götaland.

While skies in Sweden’s far north are expected to clear on Wednesday as a high pressure system moves into the region, temperatures are expected to drop down to minus 20 degrees Celsius.

Temperatures in southern Sweden, on the other hand, are expected to stay a few degrees above zero.

But winter’s grip is expected to tighten on Thursday as temperatures creep below zero in the far south and a low pressure system in the Baltic Sea brings strong winds to Sweden’s east coast, as well a snow showers to eastern parts of Svealand and Götaland.

SMHI predicts another wave of light snowfall to drift southwards out of Norrland on Friday, although clear skies are expected in many other parts of the country before more snow showers and colder temperatures sweep across much of the country at the weekend.