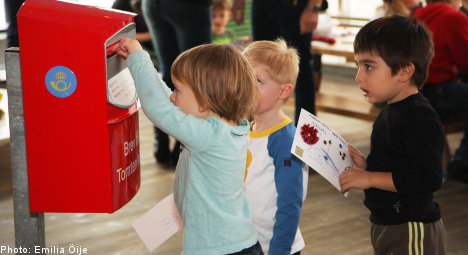 Every year, the Swedish office of Father Christmas receives around 100,000 letters from children all over the globe.

The Swedish postal service has taken a peek at 1,000 letters out of this year’s cull and compiled a list of the ten most popular presents.

Gone are the days when a plastic bucket or a hula hoop would keep kids entertained for the best part of a decade, as electronic goods such as games consoles, mobile phones and computers all seem set to contribute to a heavy sack this year for the old St. Nick.

But Rudolf and the gang will be happier with the news that more lightweight gifts such as dolls and action figures still figure prominently on the list.

Many kids not yet able to write have made their wishes clear with drawings of characters from the Pokémon and Littlest Pet Shop ranges, while plastic perennials My Little Pony, Barbie, Bratz and baby dolls also remain popular though not quite making in into the top ten.

Boys and girls alike have fallen for the unsubtle charms of the video game console, with Nintendo emerging as the most popular platform, followed by Playstation and Xbox.

Elsewhere there are vast differences in the wish lists of boys and girls: boys are five times more likely than girls to ask Santa for Lego, while eight out of ten pet requests come from girls, who are most keen to own either a puppy or a rabbit.

Santa has also received some unusual requests from children with an obvious eccentric streak, including: a meeting with the tooth fairy; a zoo (including zookeepers); and, perhaps most bizarrely, a Russian-speaking Thumbelina with a penchant for pancakes.

1. Video and computer games (including consoles)