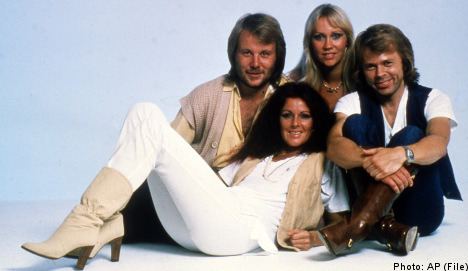 The Swedish pop icons will enter the Hall of Fame along with punk rockers the Stooges, art-rockers Genesis, reggae’s Jimmy Cliff and beat band The Hollies.

“ABBA first put Sweden on rock’s global map,” the Rock and Roll Hall of Fame said in a statement to announce the four Swedes were poised to join the likes of heavy metal group Black Sabbath, punk pioneers the Sex Pistols, and jazz trumpeter Miles Davis in rock music’s pantheon.

The five groups will be officially inducted into the rock and roll shrine at a ceremony in New York on March 15 next year.

After their induction, films recounting the five groups’ careers and a display of artifacts will be on display at the Hall of Fame Museum, while just about every song written by each of the bands will feature on a computerized jukebox.

That will mean that music fans could segue from the Stooges’ “I Wanna Be Your Dog” to Genesis’s “One-eyed Hound” and on to ABBA’s “Waterloo” before selecting “Many Rivers to Cross” by Jimmy Cliff or The Hollies’ “The Air that I Breathe.”

The newcomers on the rock and roll block “represent a great cross-section of artists that define the broad spectrum and history of rock and roll and people that have contributed immeasurably to our business,” Rock and Roll Hall of Fame Foundation president Joel Peresman said in a statement.