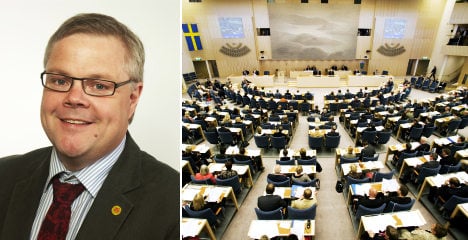 A number of independent witnesses reported seeing Svedberg, 44, stripped down to his underpants and banging on the door of the woman’s office, where she had reportedly taken shelter from his repeated unwanted attentions. Standing out in the corridor in his underwear and shirt, he continued to plead with her for sex.

The report from inside the Social Democrats’ Christmas party was later confirmed in an interview with the guilty parliamentarian.

“I went through a gastric bypass a while back, which means that alcohol goes straight into the blood stream. But I’m not going to excuse what happened, I was simply too drunk,” Svedberg told Politikerbloggen.

Filled with regret after Tuesday’s excesses, Svedberg later called his colleague to apologize. The woman did not appear to hold a grudge against her harasser.

“I understand that he’s repentant because this can’t have been his intention at all,” she told Politikerbloggen.

She explained that she was not afraid at any point as her door was locked but she decided to phone one of her colleagues, Jörgen Hellman, when the man continued to knock on her door. Hellman in turn alerted a security guard who came up to the floor on which the party was held and led Svedberg away to his own office in his underwear and shirt.

Social Democrat parliamentary group leader Sven-Erik Österberg said he had spoken to Svedberg and received his version of events.

“I’m not going to demand that he step aside at this point. At the same time I’ve told him this absolutely has to be a one-off occurrence, otherwise we can no longer have confidence in him,” Österberg told Politikerbloggen.