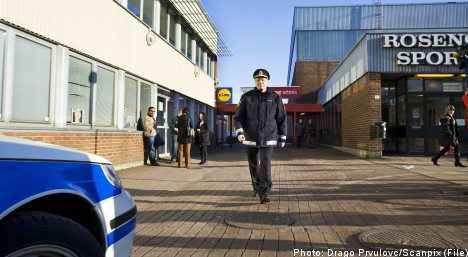 Crime in the area, which was hit by a spate of rioting around Christmas last year, has dropped by 15 percent in the last quarter, Metro Malmö reports.

“Things are looking good at the moment. But the fundamental problems of segregation, unemployment and social exclusion remain,” local police chief Börje Aronsson told the newspaper.

At the height of last year’s troubles, police and fire rescue services were attacked with rocks and stones on a regular basis. Police were subsequently allocated more resources in a bid to get to grips with the problem, a move that led to the arrest over the course of 2009 of several leading crime figures in the predominantly immigrant neighbourhood.

As the disturbances raged last winter, police noted that an already tense situation had been further exacerbated by left-wing extremists from outside Rosengård.

A year on, the situation for firemen in the neighbourhood is greatly improved, newspaper Sydsvenskan reports. Since April, threats and violent attacks against firemen in the Herrgården district within Rosengård have almost completely ceased, according to a risk analysis carried out by rescue services in southern Sweden.

“There has absolutely been a reduction in violence and threats. It’s probably down to cooperation between social services, police and rescue services,” fireman Bertil Ahlgren, one of those attacked with stones during the disturbances, told Sydsvenskan.