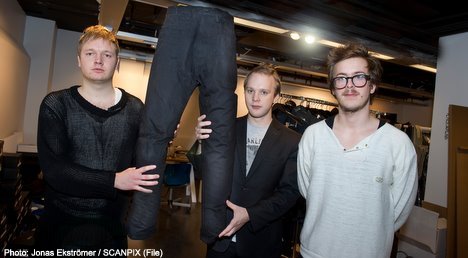 “There has been a constant flow of shoppers,” Tor Rauden Kaellstigen of company NoKo Jeans told AFP.

The jeans were to have gone on sale at PUB on December 5, but the department store pulled out at the last minute, claiming it did not want to be dragged into a political debate.

Kaellstigen, Jakob Ohlsson and Jacob Aastroem – three young Swedes with no previous experience in business or fashion – started their project in mid-2007, prompted by a desire to enter in contact with the isolationist state.

The assembly of the trousers – the cut, the make and trim – is all done in North Korea. The communist state, all but cut off from foreign influence for the past 60 years, “has been isolated for so long and ethically, we thought that any sort of increased contact with the outside world would be good,” Ohlsson recently told AFP.

The entrepreneurs visited North Korea twice and insisted that the working conditions at their Pyongyang-area factory were good.

Jeans are not allowed in the North Korean dress code, but the upstarts say they nevertheless hope that one day they can “make clothes that our friends in the country can wear too.”