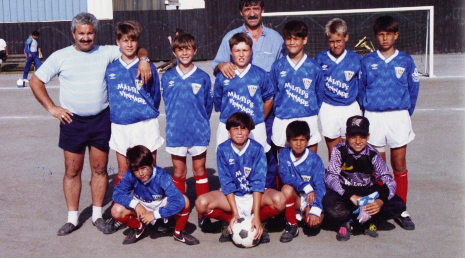 Zlatan Ibrahimovic turns out as goalkeeper for FBK Balkan

The small club from Rosengård in Malmö nurtured the future superstar for five years during his youth and under the Fifa solidarity system the minnows were able to claim a cut of Ibra’s colossal 690 million kronor transfer from Inter Milan to Barca in the summer.

However, FBK Balkan were forced to sweat it out before the cheque came through and had to produce proof that the striker played for the club.

Director Sasa Vejzovic told The Local that Barcelona needed to be convinced before writing the fat cheque.

“We sent old newspaper clippings and video clips where Zlatan talks about his time playing with FBK Balkan as our lawyer told us Barcelona wanted to see evidence.

“Our club records from the Swedish football association showed clearly that he played for our club. Zlatan has gone on the record many times saying he started with us.

“Last year Zlatan got Nike to donate our club a brand new kit for our A team. I know he’s grateful that the club did a lot for him when he was young.”

A key piece of the dossier presented to the Barcelona hierarchy was a team photo of the young Zlatan with his Balkan team-mates where, bizarrely, he was playing in goal.

The battle for a share of the 5 percent cut of Ibrahimovic’s monster transfer fee was waged in the Swedish media as neighbouring club FC Rosengård claimed they were responsible for the Barcelona striker’s development.

“It’s a relief that we’ve been proved right. We always knew we were,” added Vejzovic.

The Barcelona striker grew up in the largely immigrant neighbourhood of Rosengård in Malmö. He began his career with FBK Balkan and turned out occasionally for Malmö BI (now FC Rosengård) before joining Malmö FF in 1996.

Allsvenskan side Malmö FF will get a larger slice of the transfer fee claiming 60 percent of the 5 percent cut which works out at 20.5 million kronor for the Swedish glamour club.

Under the Fifa solidarity system, any club that nurtures a player between the age of 12 – 23 is entitled to a share of future transfer deals. The 5 percent figure is divided proportionally depending on how long the player was associated with the club.

The money will be staggered in five separate payments over two years. FBK Balkan, who play in the fifth tier of the Swedish league, intend to use the cash for further grassroots development.

Sasa Vejzovic added, “We have big plans and will use the money to improve our youth academy. Our target is to have the best youth system in the south of Sweden and to stabilise ourselves in the next division.

“This money from Barcelona is our operating budget for the next five years.”