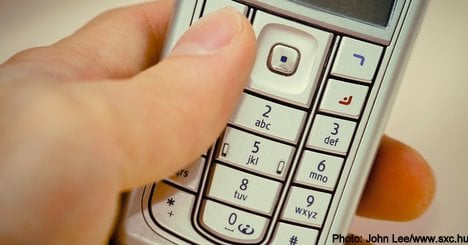 Every Tele2 customer sent an average of 8 text messages on Christmas Eve this year.

“Christmas Eve is the day with the second largest volume of text messages sent in a single day. New Year’s Eve is the most intense. We are hoping for a new record then,” Annika Kristersson, press manager at Tele2, told TT news agency.

Telia also noted an increase from 19.8 million to 23.7 million in the number of text messages sent by its customers.

According to a survey of 2292 Swedes conducted by the mobile operators, 80 percent sent a Christmas greeting via sms this year.

“Now we are beginning to get use to services where you are immediately present. In addition, everything is such a rush right up until the 24th. You don’t need to send a Christmas card 2-3 days ahead of time…,” Erik Hallberg, head of mobility services at Telia, told TT.

There was also a major upswing among obile operator 3’s customers, who sent 12.8 million Christmas greetings via mobile on Christmas Eve in 2008.

“We had close to 16 million sms this year,” said press officer Erik Hörnfeldt.

Interest in sending MMS photo messages has also grown steadily among mobile users. Almost 700,000 MMS were send, which is a 60 percent increase from 2008.

“More and more are discovering the possibility of making greetings more personal with images and sound in an MMS,” Mattias Ringqvist, head of marking for Telenor Mobile, said in a statement.