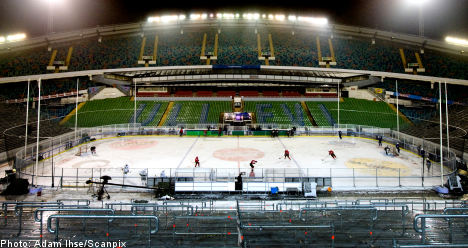 Tickets for every one of the 31,144 spots in Gothenburg’s Ullevi arena have been sold for a match-up pitting the city’s own Frölunda HC against perennial rival and defending champions of Sweden’s top professional league, Färjestad BK of Karlstad in western Sweden.

“It’s fantastic that so many want to see the match. I’ve never experienced anything like it, not even when we played the finals,” said Frölunda club head Mats Ahdrian to the TT news agency.

The current attendance record for a Swedish hockey match was set at Ullevi back in 1962 when Frölunda beat Stockholm club Djurdården 3-2.

While the official attendance tally for the historic match stands at 23,192, several thousand people without tickets also climbed over the gates, bringing the crowd to an estimated 28,000.

The prevailing European club ice hockey attendance record was set in Switzerland in 2007 when 30,076 watched a game between Bern and Langnau.

Ahdrian explained that the intensity of the rivalry between Frölunda and Färjestad likely played a part in the record-setting ticket sales.

“I think The fact that it’s a competitive league match contributed to the huge interest from the public,” he told TT.

A win by Frölunda, currently in fifth place in the Elitserien, would help it close the eight point gap separating it from third place Färjestad.

To add a bit of historical flair, players on the home team plan to don advertisement-free replicas of the jerseys worn by Frölunda in 1962 when it set the previous attendance record.

In addition, teams will also switch ends midway through the third period, as was common practice during outdoor games in the days before indoor arenas were commonplace.