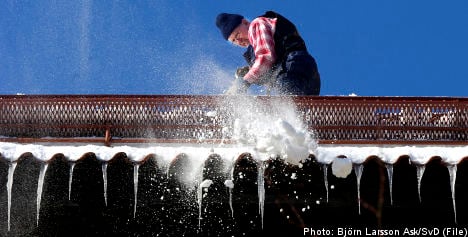 According to meteorology agency SMHI, winds from the northwest are set to drag down cold air starting on Monday night into Tuesday.

Temperatures across the entire country are expected to be below freezing by Tuesday morning, ranging from 20 below zero Celsius in Sweden’s far north to a few degrees below freezing in the south.

Another low pressure area is set to roll from the west coast across parts of south central Sweden, bringing snow to inland areas on Tuesday, along with patchy rain to regions along the coast.

By Wednesday, a high pressure system will bring clear skies and chilly temperatures of 8 to 15 degrees below zero to southern Sweden, while the north of the country can expect partly cloudy skies along with isolated snowfall and temperature around 20 below.

According to SMHI, the last day of 2009 will likely bring snow to coastal areas in Sweden’s northeast, which skies in the southern parts of the country will remain mostly clear before cloud cover blankets much of the country overnight and into the early hours of 2010.

Snow showers are expected to spread to Sweden’s entire east coast by Friday, with temperatures across the country remaining between 10 and 20 degrees below zero.