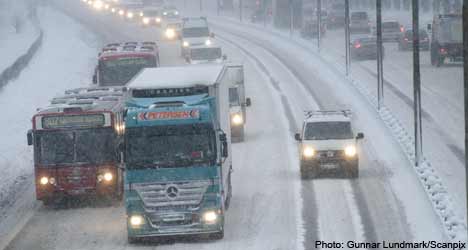 New Year’s Day will be snowy on the east coast, with the risk of icy snow conditions developing. And the entire country will be bundling up to ward off below-zero temperatures, with an average range of between minus eight and minus 15 degrees Celsius.

The weather agency has issued a ‘Class 1’ snow warning for Gävleborg and Uppsala, with snowfalls of up to 10 to 20 centimetres expected into the evening, especially towards the coast. Östergötland can expect snow squalls on the north coast from the afternoon, and the agency has also forecast snow squalls for Kalmar’s northern coast region.

SMHI has predicted icy snow conditions along nearly all of Sweden’s east coast, and local icy snow in the middle regions of the country on New Year’s Day.

The weather will clear in Norrland, by either tonight or Saturday morning, which will see temeratures fall towards minus 30 degrees Celsius. On Sunday the cool weather in the north will ease, with cloud and brief snow showers developing.

Sweden’s chilly winter weather is expected to continue into next week, with snow falls especially in the middle of Norrland. The remainder of the week should be dry in most areas.