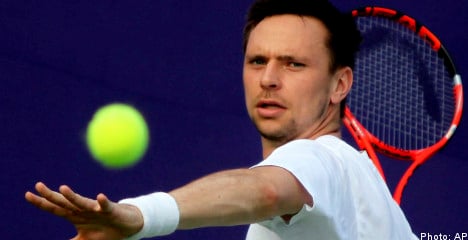 The lanky Swede, who ended Rafael Nadal’s reign at the French Open in 2009, enhanced his reputation as a giant-killer by beating Roger Federer in the semi-final of an exhibition event in Abu Dhabi last week.

Söderling, currently ranked eighth in the world, lost to Nadal in the final on Saturday, but said the tournament put him in the right frame of mind for the season ahead.

“Abu Dhabi was the best possible preparation I could have had,” he told reporters ahead of his maiden appearance in India for the 400,000-dollar Chennai Open which started on Monday.

“I played well against some of the best players in the world there and that made me feel good about the season, especially the Australian Open.”

Söderling, who was beaten by Marcos Baghdatis in the second round of last year’s Australian Open, was eyeing a longer stint when the season’s first Grand Slam starts in Melbourne on January 18.

“I don’t know why I have not done well at the Aussie Open, because I actually like Australia a lot,” the French Open finalist said.

“There is no reason really. I enjoy playing on all surfaces and I think I have a good chance of doing well there, like any other player.

“A lot will also depend on the draw because there are some tough players out there.

“But I know if I play well I can go deep into the tournament.”

Söderling, who flew into Chennai on Sunday, said he was excited about playing in India for the first time.

“India is a lot different from where I come from, certainly it’s much hotter here,” the Swede said.

“But I have heard a lot of good things about this tournament and am happy to be here.”

Söderling said he had opted for Chennai over bigger tournaments in Doha and Brisbane that are being played this week because he was looking for a change.

“I have played before in Doha and I have played in Brisbane, so I wanted to do something different,” he said.

“There are a lot of good players here and the competition will be tough. It is also the start of the season, so anything can happen.”

Söderling, the top seed here ahead of defending champion Marin Cilic of Croatia, opens his campaign against American Robby Ginepri on Tuesday.