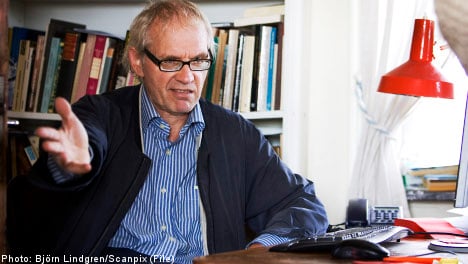 Police in Helsingborg in southern Sweden are taking seriously the threats made against Vilks, which come just three days after Danish cartoonist Kurt Westergaard was subjected to an axe attack at his home in Denmark.

The first of two phone calls to Vilks came on Monday morning. A subsequent check by the Swedish artist revealed that the call originated in Somalia, where the Islamic militant group al-Shabaab has gained increasing influence in the war torn country.

Al-Shabaab is also believed to have ties to al-Qaeda.

In the last month, al-Shabaab supporters who reportedly used to live in Denmark have killed at least 22 people, including three ministers, in a suicide bomb attack carried out in the Somali capital of Mogadishu.

According to Vilks, the man who threatened him spoke Swedish.

“The man, who spoke accented Swedish, asked me if I knew about what happened in Denmark and to the artist Kurt Westergaard. I said I certainly did,” Vilks told the Helsingborgs Dagblad newspaper.

“The man then explained that they were out after more and that they would soon come for me. I told them they were welcome,” said Vilks.

According to Patrik Peter, a spokesman for Swedish security service Säpo, the incident is being investigated by local police.

“It may be that the police will ask for our help in which case we’ll obviously do what we can,” Peter told the TT news agency.

The Helsingborg police have refused to comment on the incident.

“I have no comment whatsoever on how our investigation of the threat is being carried out,” police spokesperson Göran Hassel told TT.

Westergaard was one of the Danish artists who drew cartoons of the Muslim prophet Muhammad for Denmark’s Jyllandsposten newspaper. Westergaard’s drawing portrayed Muhammad with a bomb in his turban.