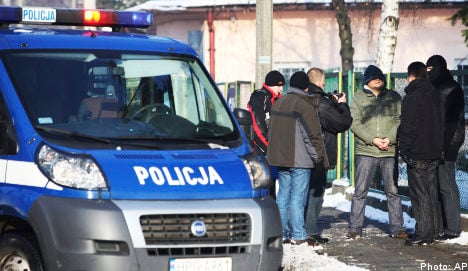 Polish investigators surround one of the suspects

“This request is now being passed on to the Prosecutor-General, who will decide which public prosecution office will handle the case,” said Martin Valfridsson, a spokesman for Justice Minister Beatrice Ask.

Ask’s Polish counterpart Krzysztof Kwiatowski informed the Swedish minister shortly before the end of the year that Warsaw was planning to request Sweden’s help following the disappearance on December 18th of the infamous sign from the entrance to the Nazi death camp.

The Polish prosecutor leading the preliminary investigation has indicated that the macabre crime was masterminded by a citizen of a country outside Poland. He would not however confirm media reports that a Swede or Swedes were suspected of being behind the plot.

But high profile defence lawyer Peter Althin said he expects to represent a Swedish citizen reported by Aftonbladet to have been planning to sell the sign to a wealthy British Nazi before ditching the plot and informing Interpol.

Althin would not confirm that his prospective client had confessed to involvement in the crime, only that he would represent the man should the prosecutor choose to press charges.

“I won’t get into it any more for the moment, except to say that I have, in Sweden, met the man who has been written about,” Althin told news agency TT.

British newspaper reports on Monday suggested that a Swedish right-wing extremist group agreed to help a wealthy UK-based collector and Nazi sympathizer acquire the sign in exchange for “huge money”.

“The collector wanted it as a trophy – and used his neo-Nazi contacts to put word out he was prepared to pay huge money for it,” a source based in Sweden told the Sunday Mirror newspaper.

Five men are currently being held in Poland in connection with the December 18th theft of the iconic, five metre long sign, which translates from German to “Work sets you free”.

According to the Mirror, the suspects in Poland were merely “bit-part players” in a larger international plot which would have also benefited pro-Nazi groups in Sweden.

“Arrangements had been made to hide the sign in a cellar in Stockholm, waiting for the British man to collect. The plan was to use the British guy’s money to fund neo-Nazi hate attacks in Sweden,” the source told the newspaper.

A rumoured Swedish connection surfaced around the time the sign was recovered three days after its removal from the front gate of the Auschwitz concentration camp, with Swedish tabloid Aftonbladet reporting that an extremist group was plotting a politically-motivated attack against the Swedish parliament, the foreign ministry, and the prime minister’s residence.

While Swedish intelligence agency Säpo confirmed it was investigating a far-right attack, the agency refused to say whether there was a connection between the Swedish plot and the theft of the “Arbeit Macht Frei” sign.

The sign has long symbolized the horror of the camp, created by Nazi Germany in occupied Poland in 1940 and run until Soviet troops liberated it in 1945.