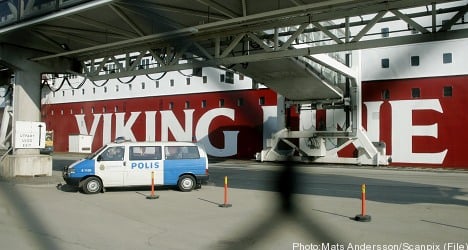 The usual party atmosphere onboard the Viking Line ferry Mariella was doused in the early hours of Monday morning following the incident.

The Maritime Rescue Centre (Sjöräddningscentralen) was alerted when a man was reported to have fallen overboard as the vessel sailed south of the island of Utö in the Baltic Sea.

The ferry was on its way to Stockholm and continued its voyage as rescue attempts were made. A sea helicopter was dispatched to the scene but failed to recover anyone from the water.

Swedish police were at the harbour when the ferry docked at the Stockholm terminal on Tuesday evening.

”We assume it was murder,” police commissioner Bengt Carlsson told newsagency TT. ”The man is suspected on reasonable grounds.”

A male witness told police he saw the man being thrown overboard by a fellow passenger.

”He saw two men talking out on the deck which seemed harmless enough but then suddenly this happened,” Carlsson added.

The witness and two men were questioned and the 39-year-old was taken into custody at around 18.40 on Tuesday. The second man is not believed to be a suspect at this stage.

Police have conducted a forensic investigation of the ferry and lengthy video footage from security cameras is being reviewed.

They are now appealing to passengers who could have witnessed the incident and are liaising with Finnish police over the matter.

As the incident took place in Finnish territory the man could be handed over to Finnish authorities who could lead the the ongoing investigation.