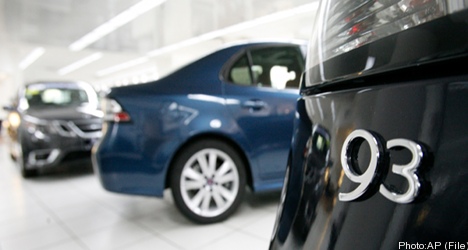 GM said it hired the consulting firm AlixPartners “to supervise the orderly wind-down of Saab, and has requested approval of the selection by the appropriate authority in Sweden.”

The US auto giant, in the process of a massive restructuring after bankruptcy last year, said the process for Saab “is expected to take several months, and will ensure that employees, dealers and suppliers are adequately protected.”

GM also confirmed that it has received “several proposals” for Saab and “is continuing to evaluate these proposals” even as it begins liquidation of the auto division.

Several groups, including Dutch sportscar maker Spyker and a group comprised of Formula One boss Bernie Ecclestone and Genii Capital, a Luxembourg investment firm, have said they presented GM with last-ditch bids to rescue Saab.

The head of Sweden’s influential IF Metall union, Stefan Loefven, blasted GM for moving to close the company at the same time as it is evaluating bids for the loss-making brand.

“It is irresponsible of GM as an owner to go in two directions, both pursuing the sale (of Saab) and the winding up,” Loefven said.

In addition to the bids disclosed this week, Swedish media also reported Friday that another group headed by Swedish businessmen was interested in acquiring Saab and scaling down its operations to build 45,000 to 50,000 cars a year.

GM Europe’s spokesman Stefan Weinmann told AFP that the company was going ahead with the closure of Saab but at the same time considering any new bids.

“Essentially, the two processes will continue in parallel… we will look at the proposals and analyze them and see whether we can find a good solution for everybody,” he said.

GM’s actions regarding the Saab sale, which it put on the block a year ago, have been repeatedly criticized by the Swedish government and Saab’s unions, with questions arising over whether the US giant really intended to sell the unit.

“We will see what we can do, in order to, if possible, contribute to a positive sale of Saab,” Jöran Hägglund, Swedish enterprise ministry state secretary, told Swedish news agency TT.

He will be heading a Swedish delegation traveling to Detroit, Michigan, on Saturday to hold talks early next week with officials from GM and Ford, which is in the process of selling its Swedish unit Volvo to Chinese carmaker Geely.

Saab employs 3,400 people in Sweden and is among the brands being shed by GM as part of a massive restructuring effort that began in 2005 and accelerated last year when the largest US automaker went bankrupt.

Analysts have warned that some 8,000 jobs could be lost with Saab’s closure. The Swedish brand, which has been owned by GM for two decades, has been on the verge of extinction since GM said on December 18 it would wind down Saab, citing failed talks with Spyker.