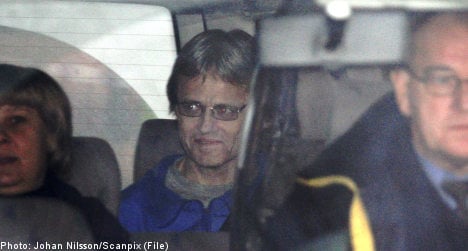 “It would simply be best for me to die, rather than sit here like a living corpse,” the 58-year-old Olsson wrote in a blog entry posted at 5am on Sunday morning, according to the Aftonbladet newspaper.

Police were called to the Sundsvall Forensic Psychiatric Centre in northern Sweden shortly before 6.30am after staff at the clinic discovered Olsson’s lifeless body during a routine check.

Attempts to revive him were unsuccessful.

Västernorrland police spokesperson Börje Öhman told the TT news agency that authorities are treating the death as a suicide and that there are no suspicions of foul play.

Olsson was convicted in 2004, more than 15 years after the two crimes he is said to have committed took place.

In March 1989, 10-year-old Helén Nilsson disappeared from her home in the southern Swedish down of Hörby.

Six days later, her dead body was found in a plastic bag, showing signs have having been raped and strangled.

Six months later, in August 1989, the body of Jannicka Ekblad, a 26-year-old prostitute from Malmö, was discovered strangled and beaten near a rest stop outside Hässleholm in southern Sweden.

After investigating the deaths for more than a decade, police received an anonymous tip about Olsson which ultimately led to him agreeing to a voluntary DNA test in 2004.

DNA evidence from Olsson tied him to Nilsson, and police also found traces of Ekblad’s blood at Olsson’s cabin. In addition, police were able to connect Olsson with anonymous confessions to both crimes received via letters and mobile phone calls.

Olsson was convicted in December 2004, ultimately being sentenced to time in a psychiatric care facility.

But he has always maintained his innocence, arguing that the Swedish judicial system convicted an innocent man.

He published a book in 2006 entitled “Utan rättssäkerhet” (‘Without the rule of law’) detailing what he considered to be a miscarriage of justice.

In his final blog post, titled “Epilogue”, Olsson continued to claim he had nothing to do with the crimes.

“I didn’t get a chance to defend myself or call my own witnesses. There’s not a shred of justice anywhere in the judgment against me,” he wrote.

“I hope that someone with enough courage will want to take my case and examine what happened. Not least for the families of the victims, but also for my own relatives.”