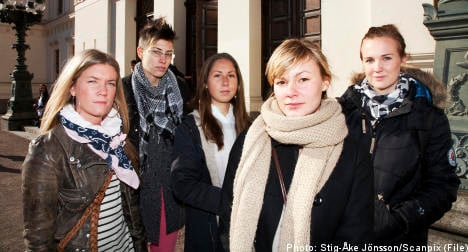 Several of the women who have sued Lund University for discrimination

“The education system should open doors – not shut them in the face of young women who are motivated to study,” Krantz wrote in an article published in the Dagens Nyheter (DN) newspaper.

He explained that the government plans to submit a proposal for consultation which would remove gender-based affirmative action from Sweden’s higher education laws.

The government has allowed universities to practice affirmative action since 2003 in order to encourage an equal number of men and women at the country’s universities.

Women currently represent about 60 percent of university students in Sweden, a pioneer in gender equality.

The proposed change comes following criticism that men received priority admission to programmes where their gender was underrepresented and where there were a higher number of applicants with top marks than available spots, such as programmes in veterinary medicine, dentistry, medicine, and psychology.

Because more female than male applicants had top marks, the consequence has been that men have been give priority due to a clause in Sweden’s current higher education laws stipulating that gender quotas should be used to choose between applicants of otherwise equal merit.

The rules have had an uneven effect, according to Krantz.

“The current regulations yield a totally unfair result. Last year it was almost only women, 95 percent, who had worked hard to get into their dream programme but who did not get in because of their gender,” Krantz wrote.

For programmes dominated by men, the system does not work in the same way because there are fewer overall applicants.

The Svea Court of Appeal recently ruled in favour of 44 women who were not admitted to a veterinary programme because of their gender, awarding them damages of 35,000 kronor ($5,000) each.

In another class-action lawsuit currently in the courts, 31 women have sued

admissions priority to the psychology programme in 2008.