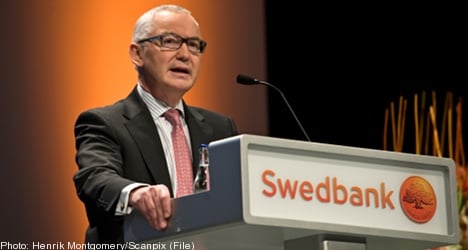 Stålberg, who has been chairman since 2003, has been widely criticised for the bank’s investment in the Baltic region amid ongoing losses for the concern.

“It was necessary to get rid of him,” said Günther Mårder, head of the Swedish Shareholders’ Association (Aktiespararna), to news agency TT.

Swedbank is expected to report losses of around 10 billion kronor for 2009.

Yet, following the announcement, Stålberg received gratitude for his six-year service from the head of the bank’s biggest owner, Anders Sundström, CEO of insurance giant Folksam.

“I have had and continue to have have full confidence in him,” he said.

Unusually for a chairman, Stålberg is employed by the bank and, in accordance with his contract, steps down from his position on full pay until he turns 60 in January 2011.

Swedbank will appoint a new board at their annual general meeting on March 26th in Stockholm.