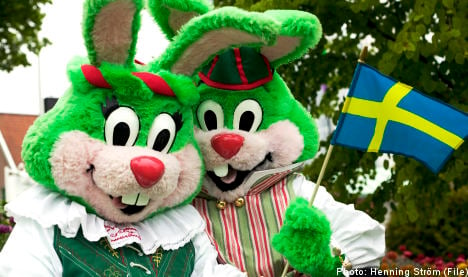 The 33-year-old’s father was also given a three year sentence by Halmstad district court for his role in the major disability benefits swindle, local newspaper Hallandsposten reports.

As The Local reported in July, the 33-year-old man was asked to repay millions of kronor in social insurance benefits after authorities obtained a picture of him dancing with a life-sized rabbit at the Liseberg amusement park in Gothenburg.

The 33-year-old, from Halmstad in western Sweden, had claimed for years that he was bound to a wheelchair and as a result qualified for public assistance in the form of payments made to “people in his immediate environment” who helped him with daily tasks.

The court found that the man’s entire family was in on the scheme, described as highly systematic. As a result, his mother and sister were also convicted, both receiving suspended sentences.

While the doctor who originally examined the man didn’t find any reason as to why the man couldn’t walk, he nevertheless accepted the man’s claims.

Claiming he needed help eating, turning over in bed and getting from one place to another, the man succeeded in securing employment for family members, who were employed as his personal assistants.

But the man’s scheme began to unravel back in June 2007 when police raided his home in response to a complaint of abuse and illegal imprisonment.

Among items confiscated by police were several photographs, including a picture of the man dancing with the life-sized bunny which serves as the mascot for Liseberg.