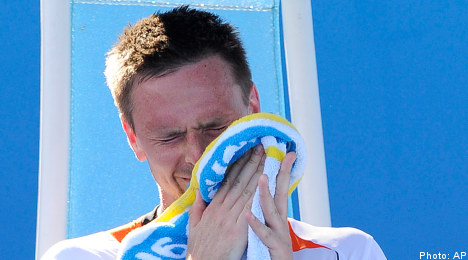 After a hard.fought win in the first set, Söderling then breezed through the second set 6-2, setting up what looked to be an easy victory against the 113th ranked Spaniard.

But Granollers then rallied, taking the next two sets to force a fifth and decisive set.

After falling behind 0-2 in the final set, Söderling took back a game.

The previously unheralded Spaniard returned to the court with a renewed spark, successfully breaking Söderling’s serve twice, leaving the Swede struggling to get back in the match.

Söderling made 67 unforced errors and was scathing in his assessment of his performance.

“No, I started terrible and finished terrible,” he said bluntly when it was suggested things were going well early in the match.

“I played a horrible match today and I am terribly disappointed.

“I didn’t feel good at all and I didn’t play well.”

Although the fragile Swede, who has won four ATP titles, pulled out of the AAMI Classic last week because of elbow tendonitis, he said he was 100 percent fit and that the loss had nothing to do with any injury.

Söderling said his frustration had nothing to do with his good form in 2009.

“I would have been annoyed even if I didn’t play well last year,” he said.

It was the third Grand Slam in a row where Söderling had faced Granollers, who is something of a doubles specialist, but the Spaniard’s first ever win over the Swede.

Söderling played the 23-year-old three times last year, including the US Open and Wimbledon, winning all three matches convincingly and dropping just one set to Granollers in those matches.

Tuesday’s loss continues a tough start to the year for last year’s French Open finalist, having lost in the first round in Chennai and now here.