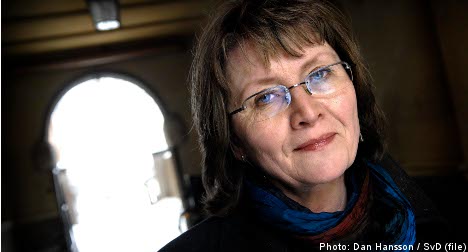 ”Kurdo is trying to perform a character assassination of Stieg as a journalist. This is pure slander,” Gabrielsson told the Swedish television channel SVT.

Gabrielsson says that Stieg Larsson only cooperated with Baksi for a short period on an anti-racist magazine and a few political articles in the 1990s and that Baksi did not actually know the author that well.

Before his death from a sudden heart attack in 2004, Larsson, much like his character in the Millennium novels, Mikael Blomqvist, was known for his workaholic lifestyle, running the anti-racist magazine Expo and penning freelance articles aimed at exposing Swedish neo-Nazis by night, and working at the TT news agency as a graphic artist and journalist by day.

Kurdo Baksi told SVT that Larsson was a ”mediocre” journalist who lacked objectivity in his work at the news agency.

Larsson’s former boss at TT, Kenneth Ahlborn, says the claims are false and an attempt to grab the media spotlight.

”I was Stieg’s boss. We worked in the same room every day. If anyone should speak about his relationship to TT it should be me. The assertion that he could make up biased, objectionable articles is so bizarre. We don’t work like that at TT and Stieg was not like that,” he said.

In an article in Dagens Nyheter newspaper on Tuesday, Ahlborn wrote that Baksi’s publishers should withdraw the book unless the allegations can be proven.

The Millennium Trilogy, published just after the author’s death in 2004, has sold more than 20 million copies in Europe alone. Eva Gabrielsson, who lived with the author for 30 years but was not married to him, is locked in a protracted inheritance dispute with Larsson’s relatives over an estimated 130 million kronor estate and is currently writing her own book on the controversy.

LI
‘Lisbeth Salander is immortal – she will live on in one way or another’
Url copied to clipboard!